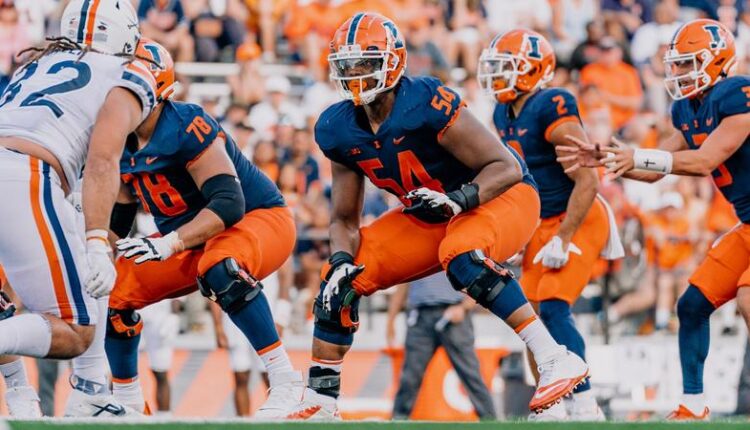 CHAMPAIGN, Ill. — The Fighting Illini will play their final nonconference opponent on Thursday night when the Chattanooga Mocs come to Memorial Stadium. Illinois is coming off its first bye week of the season and sits at 2-1 on the year, while Chattanooga enters the contest with a 3-0 record.

Running back Chase Brown leads the FBS in rushing yards (496), and he surpassed 2,000 yards on the ground in the Orange and Blue in Illinois’ 24-3 win over Virginia on Sept. 10.

The Illini are looking to remain unbeaten at Memorial Stadium and go unbeaten in nonconference play for the first time since 2011, while Thursday marks the first meeting between the programs.

• Illinois faces an FCS opponent for the first time since beating Western Illinois, 34-14, in 2018. Illinois is 17-0 all-time against FCS opponents (formerly I-AA).
• Chattanooga was ranked #9 in last week’s FCS Coaches Poll.
• Illinois is looking for its first undefeated nonconference schedule since winning four straight nonconference home games to start the 2011 season (Arkansas State, South Dakota State, #22 Arizona State, Western Michigan).
• Illinois’ first four opponents have a combined record of 11-2 this season.
• Bret Bielema is 7-8 in his Illinois career. He is looking to be the first Illini head coach to start .500 or better through his first 16 games since John Mackovic started 9-6-1 in the 1988-89 seasons.

• Illinois defensive ranks nationally: 15th in scoring defense (10.7), 12th in third-down conversion rate against (23.9%), 5th in opponent passer rating (81.8), 17th in total defense (265.3)
• Illinois is one of five schools in the nation that has yet to allow a touchdown at home this season, including Georgia, Arkansas State, Marshall, and UMass.
• Illinois has allowed only 74 rushing yards allowed in the last two games (1.3 yards/rush).
• Illinois’ two wins have come when the opponent’s third down conversion rate has been under 10%. Wyoming went 1-12 on third downs and Virginia went 0-15.
• Illinois allowed just 30 passing yards against Wyoming, its fewest passing yards allowed since Sept. 15, 2012 when the Illini held Charleston Southern to 29 passing yards.

• Chase Brown is the nation’s leading rusher with 496 yards. He also leads the nation in rushes of 10+ yards (18), while ranking 22nd in yards per rush (6.61) and seventh in all-purpose yards per game (173.7).
• Brown is aiming to become the first Illini in history to rush for 100+ yards in five straight games. He tied the Illinois record against Virginia with his fourth straight 100-yard rushing game, joining Mikel Leshoure (2009-10), Robert Holcombe (1997) and JC Caroline (1953).
• Brown was the first player in program history to rush for 140+ yards in the first three games of a season. He went for 146 yards on 20 carries against Virginia, had 199 yards on 36 careers at Indiana, and 151 yards on 19 carries against Wyoming in Week 0.
• Brown had his ninth career 100-yard game against Virginia, tied for the seventh-most in Illinois history.
• Brown surpassed 2,000 career yards in the season opener against Wyoming when he rushed for 151 yards and scored three touchdowns (2 rushing, 1 receiving).
• Brown became the 14th 1,000-yard rusher in program history when he broke the 1,000-yard mark in the season finale against Northwestern last year. He finished the season with 1,005 rushing yards on 170 carries (5.9 per carry) and five touchdowns.
• Brown is looking to join an elite group if he can reach 1,000 yards again in 2022. Only Jim Grabowski and Robert Holcombe have reached 1,000 yards rushing in two seasons for Illinois.
• Brown was the 14th 1,000-yard rusher coached by Bielema in his 13-year head coaching career.
• Brown’s 223-yard rushing game at Penn State marked his second game of 2021 with 200+ yards (257 vs. Charlotte). He joined Howard Griffith (1990) and Rashard Mendenhall (2007) as the only players in Illinois history with multiple 200-yard rushing games in a single season. Brown nearly became the first Illini running back to rush for 200 yards on three occasions, falling one yard short at Indiana.
• Brown’s 223 rushing yards at Penn State last year were the most ever by an opponent at Beaver Stadium and the fourth-most ever against Penn State.
• Brown was the first Illini in history to run for 220+ yards twice in a career. He did it in the span of three games during the 2021 season (vs. Charlotte, at Penn State).
• Brown led the nation in yards after contact in 2021’s Week 8 with 145 at Penn State, according to PFF. He led the nation in yards after contact twice in a four-week span in October 2021 and he was the only running back to lead the nation in yards after contact twice during the 2021 season.
• Brown has 2,059 rushing yards for his career at Illinois, No. 18 on Illinois’ all-time career rushing list and only 12 yards behind Red Grange. Brown tallied 352 yards as a freshman at Western Michigan for 2,411 for his career.

• Illinois QB Tommy DeVito is one of 25 quarterbacks nationally to have 600+ yards passing, 6+ touchdowns, and a completion percentage over 66%. In the Big Ten, only Taulia Tagovailoa (Maryland), CJ Stroud (Ohio State), and Graham Mertz (Wisconsin) have reached those numbers.
• DeVito is one of 16 quarterbacks in the nation to have multiple touchdown passes in each of the first three games. In the Big Ten, only CJ Stroud (Ohio State) has accomplished the feat.