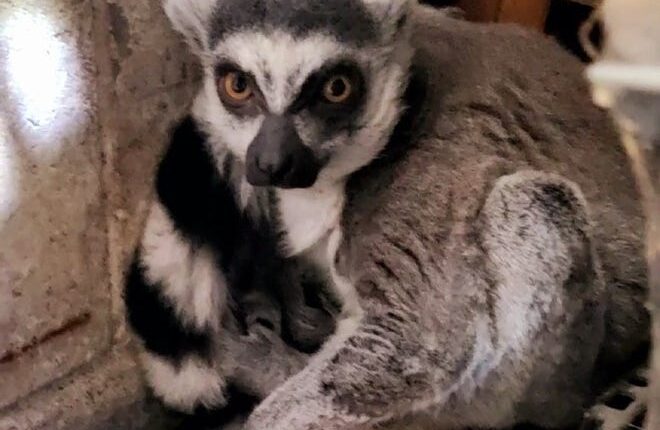 An Illinois family made an unusual home discovery when they found an endangered ring-tailed lemur inside their garage.

The surprising find began Wednesday night when a family in Bloomington, Illinois, over 50 miles northeast of Springfield, heard noises coming from their garage, according to the Miller Park Zoo. When the family investigated the noise the following day, they discovered a ring-tailed lemur.

Ring-tailed lemurs are listed as an endangered species on the International Union for Conservation of Nature Red List of Threatened Species as it has a decreasing population due to limited resources, farming, and climate change.

The lemurs are a social species, according to the zoo, and possess large canine teeth “which can cause significant injury.” They are native to the southern part of the African island Madagascar, according to the IUCN, and became popular following the animated “Madagascar” movies.

The recovery of ‘King Julian’

After the family found the lemur, they notified the Illinois Conservation Police, who then reached out to the zoo for assistance.

When officials arrived at the home, the family said they fed the animal some fruit while keeping an eye on it. The daughter of the family had also named the lemur “King Julian” in reference to the “Madagascar” movies.

The zoo officials said got permission from the family to enter the garage and “calmly and safely” collected the animal and put it in a crate.

The animal was taken to the Miller Park Zoo, where it is “safely housed and under expert care,” according to the zoo. Miller Park Zoo Director Jay Pratte told USA TODAY the lemur has been eating food and is relaxed around the care team.

“He appears fairly healthy,” Pratte said. “He’s in a new environment, in the quarantine facility at the zoo, but he’s responding well to keepers.”

How did a ring-tailed lemur get to Illinois?

Authorities are not sure how the lemur got into the garage or the city, as the Illinois Conservation Police and local authorities are investigating the ownership and permitting of the lemur. In the meantime, the animal will stay at the zoo.

“Once the state ascertains what will happen with the lemur, the zoo will work with authorities to decide the appropriate next steps,” Miller Park zoo said.

USA TODAY has reached out to Illinois Conservation Police for additional information.

Lemurs are not domesticated animals and shouldn’t be kept as pets, the zoo says, adding they can carry zoonotic pathogens that can be directly transmitted to humans.

What’s everyone talking about?: Sign up for our trending newsletter to get the latest news of the day

‘Actually live his life as a lemur’

It is illegal to own an exotic animal in Illinois, Pratte said. Lemurs are also protected by the Federal Endangered Species Act, as the zoo says they should be taken care of by qualified zoological organizations.

Pratte believes the animal didn’t travel far to the home, and since no one has contacted authorities about a missing lemur, it was likely kept as a pet illegally.

“The illegal animal trade impacts conservation really badly,” Pratte said. “When you think about what this little guy’s life should have been — and has been instead — I appreciate that we’re having the opportunity to kind of share this with people and maybe get somebody to think twice about trying to illegally buy a pet lemur or anything like that.”

Pratte said if the animal is determined to be owned illegally, the lemur may be taken to a zoo or sanctuary where it can socialized with other ring-tailed lemurs.

“He was probably pulled prematurely removed from his mother were far too early to be sold as a pet, so he’s gonna have some developmental kind of delays and issues,” he said. “Though, he seems like he’s really quick, he’s really bright, he’s ready to learn. I think that under the appropriate professionally managed circumstances, he’s got a good chance to actually live his life as a lemur, depending on how things play out. “

Anyone with information on the lemur’s origins should contact the Illinois Conservation Police at 1-8772DNRLAW (236-7529).