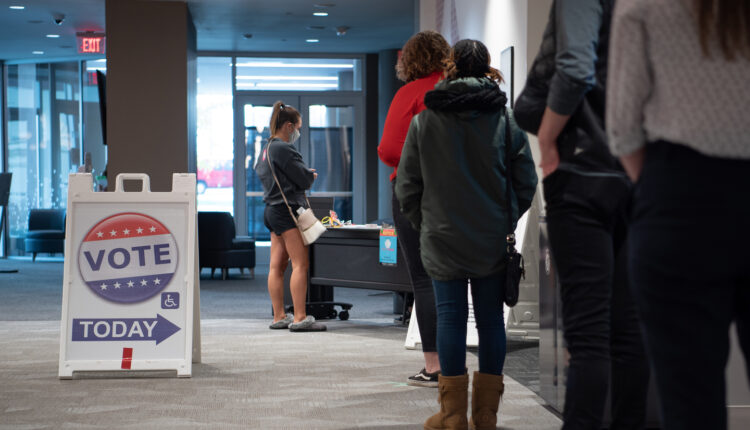 Illinois State University has been recognized by the ALL IN Campus Democracy Challenge (ALL IN) as a 2022 ALL IN Most Engaged Campuses for College Student Voting.

The University is one of 394 institutions on the Student Voting Honor Roll. ALL IN recognizes efforts to increase non-partisan democratic engagement and student voter participation in the 2022 election.

“This recognition is another sign that our campus is reaching new heights in civic engagement,” said University President Terri Goss Kinzy, who noted that Washington Monthly ranked Illinois State as one of America’s Best Colleges for Student Voting, and the University has been designated a Voter Friendly Campus. “Illinois State continues to lead the way in providing excellent higher education and civic learning.”

In a recent ISU Student Voter Engagement Survey, 87 percent of Illinois State students responded that they are registered to vote. In the Fall 2022 midterm elections, more than 1,400 students registered to vote at the Bone Student Center on Election Day. “The McLean County Clerk’s Office confirmed that we were the busiest polling place in the county,” said Assistant Director Harriet Steinbach of the University’s Center for Civic Engagement. “We are so proud to provide a polling place at ISU.”

The center spearheads voter resources and information for students at Illinois State by providing the Redbird Voter Guide, a voter engagement tool kit for instructors and student groups, as well as opportunities to work with the Voter Engagement Coalition (VEC) to support voter engagement on campus .

“It is the goal of the center to create connections that inspire and engage our students,” said Director of the Center for Civic Engagement Katy Strzepek. “Illinois State students are involved in their communities and leading the way in civic engagement.”

The ALL IN challenge is geared toward empowering colleges and universities to achieve excellence in nonpartisan student democratic engagement. “College student voter turnout has increased since 2016, and this increase has been driven by students. The ALL IN Campus Democracy Challenge is excited to expand our ALL IN Student Voting Honor Roll to recognize these student voting champions across the country,” said Executive Director of the ALL IN Campus Democracy Challenge Jennifer Domagal-Goldman.

Find out more about voter engagement at Illinois State at the Center for Civic Engagement.

The ALL IN Campus Democracy Challenge:

ALL IN, in collaboration with over 960 higher education institutions, seeks to make participation in local, state, and federal elections a social norm; substantially increase the number of college students who are democratically engaged on an ongoing basis, during and between elections, and not just at the polls, and; make educating for democratic engagement on college campuses an accepted and expected part of the culture and curriculum so that students graduate with the knowledge, skills, behaviors, and values ​​needed to be an informed and active citizen.

The Player-Coaches of Addiction Recovery Work Without Boundaries