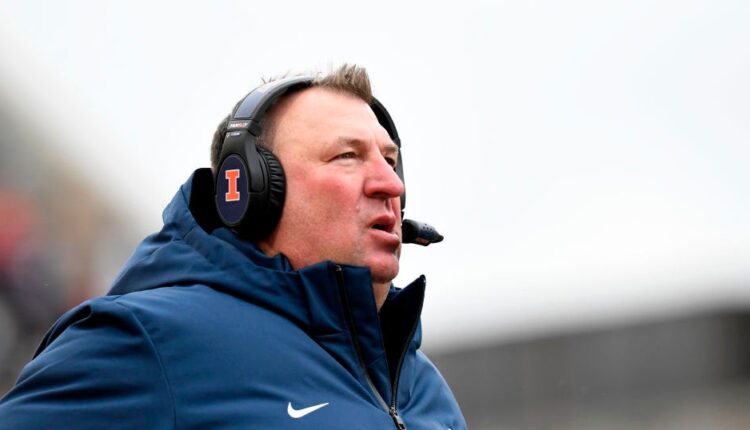 CHAMPAIGN — Illinois coach Bret Bielema never claimed he had a deep team, but that issue in Year Two of his tenure didn’t really show itself through the first two months of the season.

Injuries are starting to pile up at certain positions for Illinois (7-3, 4-3 Big Ten) and have proven harmful to Illinois in back-to-back losses, including Saturday’s 31-24 home loss — one that dropped Illinois’ odds of winning the Big Ten West by more than 50%, according to ESPN’s Football Power Index.

The Illini were forced to dive into his third-string at cornerback on Saturday, and Aidan O’Connell (237 passing yards, three touchdowns) and the Boilermakers (6-4, 4-3 Big Ten) took advantage.

Starting cornerback Tahveon Nicholson, who left last week’s game with a concussion, suffered what Bielema called a likely season-ending (though unspecified) injury. Backup Terrell Jennings (chest) already was in a sling on the sidelines due to an injury suffered last week, and no. 4 cornerback Tyler Strain after intercepting a pass in the first half left the game with a concussion. That forced Illinois to play true freshman Xavier Scott and rotate nickelback/free safety Quan Martin to cornerback.

The thinning Illini secondary struggled to stop Purdue, and against Martin and Scott, the Boilermakers completed 7 of 12 passes for 90 yards and two touchdowns, according to Pro Football Focus.