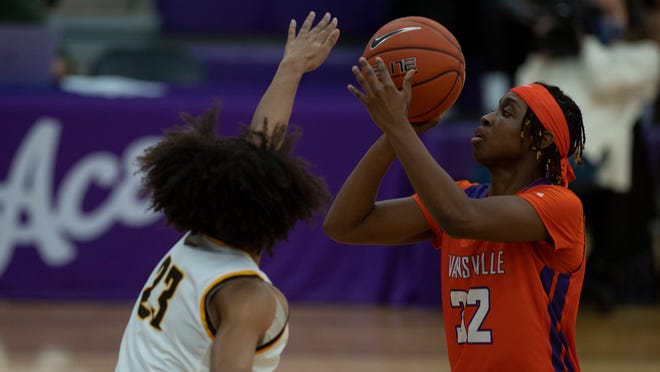 NEWBURGH, Ind. — As she walked to the front of the Turoni’s dining room, University of Evansville women’s basketball coach Robyn Scherr-Wells had “exciting news” to announce Wednesday evening in front of the “Aces” and “Bud Light” backdrop with sunlight fighting through the shade behind. It was time to reveal the Purple Aces’ non-conference schedule, which means “games are right around the corner,” she said.

The Aces unofficially begin their second season of Scherr-Wells’ tenure with an Oct. 29 exhibition against Roosevelt, which is transitioning to Division II and is where she once coached — “it’ll be weird coaching against them,” she said. From there, they’ll play five road and four home games before Missouri Valley Conference play. They are coming off their best season in five years, but there will be an importance on wining more as the program continues to grow.

“It’s been a work in progress for a long time, so it’s great to finally get it out there,” Scherr-Wells said. “It just reminds you that basketball is right around the corner.”

A return game from last season, which UE won 67-57 at Meeks Family Fieldhouse. EKU 15-16 last season, bowing out to no. 25 Liberty in the ASUN Tournament.

A formidable opponent, the Hawkeyes are another rematch from last season and are the headliners of the Aces’ non-conference slate. UE lost in Iowa City 93-56 with Caitlin Clark scoring 44 points that evening. Returning senior Abby Feit scored 22 for the shorthanded aces, who were without three players, in the loss.

“(Iowa has) basically their whole team returning; it’s gonna be a tough test,” Scherr-Wells said. “We went up there last year and played them shorthanded and had moments of competing really well in the game.”

The morning part of a doubleheader on Education Day with the men’s team’s game against Southeast Missouri in the evening, this will be the only regular season game the women’s team plays at Ford Center. The Aces were supposed to meet the Cougars in Chicago last season, but that was canceled due to COVID-19 protocols. UE leads the all-time series 2-0.

The second headliner of the non-conference schedule and the second Big 10 opponent, the Fighting Illini come into the season under the stewardship of first-year coach Shauna Green. Illinois won the last game between the two in 2019 and leads the series 2-0.

“Not totally sure what they’re going to look like (due to the coaching change), at least we’ve got them two weeks into the season where we’ll get to see some games and get to scout them,” Scherr- Wells said. “I’m glad we’re not playing them first game of the season where you just don’t have much of a scout or anything.”

A return game from last season, the Aces fell 81-73 in Oxford, Ohio. The Redhawks finished with a near-identical record as UE, with the two sides coming in fairly evenly matched.

Another return game from last season, UE dominated the Eagles 79-49 in Evansville. Morehead State is coming off a 1-27 season, its lone win coming against NAIA program Midway University, looking to improve in most areas.

The Aces played at Bellarmine last season, escaping with an 89-83 win. The Knights are also coming into the season looking to improve their results, finishing 4-29 and bowing out it in the first round of the ASUN Tournament.

UE and SEMO have not played since 2019, when the Redhawks beat the Aces 83-60 at Cape Girardeau, Missouri. The Redhawks are coming off a 6-24 season and will be looking for a stronger showing in the new-look Ohio Valley Conference.

Like SEMO, UT-Martin is looking for a strong showing in the OVC. The Skyhawks are coming off a 12-18 season.

The teams have not played since 2015, with UT-Martin leading the all-time series 7-6.