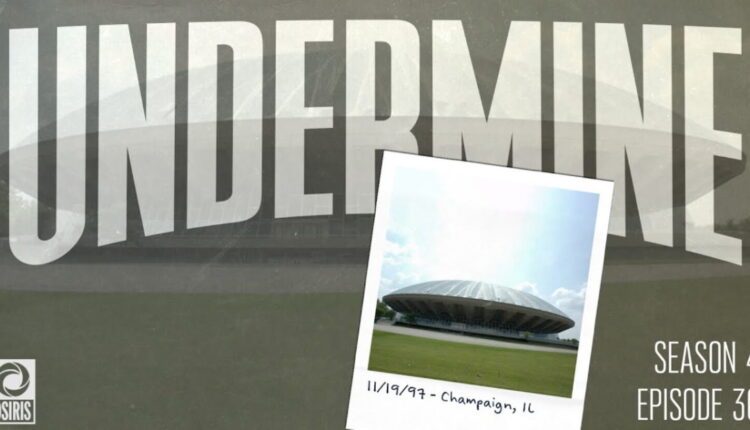 Listen to an interview with Phish lyricist Tom Marshall and Osiris’ RJ Bee about the standout concert from 25 years ago today.

Undermine Season 4 has examined noteworthy Phish shows in the 1990s in a lead-up to a show-by-show analysis of the band’s pivotal Fall Tour 1997. The previous episode featured Phish guitarist Trey Anastasio discussing the November 17, 1997 concert in Denver.

The conversation about the November 19, 1997 Phish show featured Kahn and Bee exchanging memories of attending the Wednesday night concert on the campus of the University Of Illinois. They recalled heightened pre-show energy inside Assembly Hall, the same venue Kahn saw his first Phish show during their 1995 Fall Tour.

The discussion covered the first set, which began with “Julius” and then a nicely jammed “Bathtub Gin.” One of the songs played in the first set was “Limb By Limb,” and Bee prompted Marshall to detail how the song’s lyrics were written and making the demo track he recorded with Anastasio. The first set “Fee” and its peculiar “Meatstick” transitioned into “Run Like An Antelope” was another aspect of the first the trio delved into.

Bee brought up the fact that in The Phish Book, Anastasio mentioned there were only two Fall ’97 shows he did not like and called out one of the sets in Champaign. Kahn mentioned he hoped Trey was talking about the first set as the four-song second set was considered one of his favorites.

The chat moved on to the second set, focusing on the incredible “2001” opener, the 28-minute improvisation tour de force “Wolfman’s Brother,” the otherworldly “Makisupa Policeman” and the satisfying “Taste” closer. Ending with the “Possum” encore, Kahn then shared his thoughts on the significance of Phish’s Fall Tour 1997 and what it means to him now 25 years later.

Umphrey’s McGee keyboardist Joel Cummins makes an “encore” appearance at the end of the episode to talk to Benjy Eisen about his experience at the Champaign ’97 Phish show. Cummins went to the concert with co-founding UM bassist Ryan Stasik. Joel detailed his particularly successful night predicting the setlist during the fantastic second set.

Read Andy Kahn’s essay on Phish’s November 19, 1997 show from JamBase’s retrospective series and watch his appearance on Undermine below: