Just How Good Is Chase Brown? 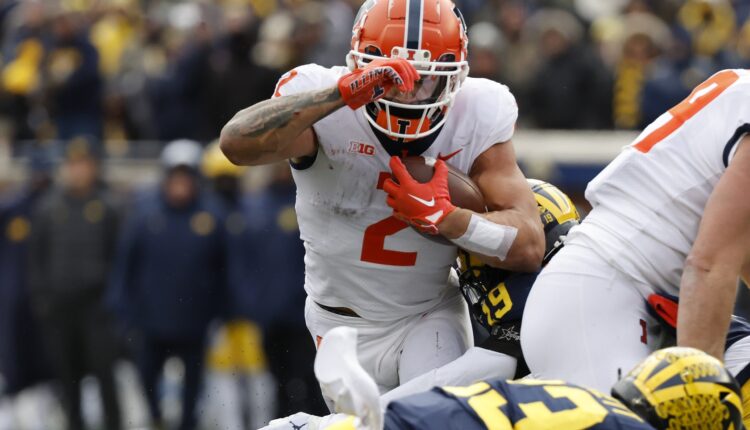 The nation’s leader in rushing, Illinois’ Chase Brown has come a long way from his days at Western Michigan some five years ago. The bellcow of bellcow backs for one of the country’s most overpowering ground attacks, the eyes of the NFL have swarmed to Champaign, Illinois to get a glimpse at one of college football’s most tantalizing talents.

The nation’s leading rusher scores his 2nd touchdown of the day to give Illinois a 7-point lead over undefeated Michigan 🏈pic.twitter.com/Rw19t0qXyH

A year that has seen him run roughshod over the entire Big Ten conference, his performance against the top-five-ranked Michigan Wolverines opened up a can of worms when it comes to projecting his success to Sundays.

An impressively built athlete at 5-foot-11 and 195 pounds, while his 199-yard performance to open the season against Indiana looked good on the box score—as did a pair of games against Iowa and Wisconsin that saw him total more than 260 yards combined—scouts and industry experts alike circled the Illini’s visit to the Wolverines as a resume game for Brown. Although production—no matter the opponent—is taken into consideration during the pre-draft process, succeeding against the top ‘bump’ on your schedule rapidly accelerates draft stock—especially against a team as stingy as Michigan.

Despite facing off against a group that ranked tops in the country in rushing yards allowed per game (72.6) heading into last weekend, Brown had no issue in getting going early. He amassed 140 yards and two touchdowns via 4.8 yards a pop. His success was overwhelmingly impressive due to the defensive blueprint deployed by Jim Harbaugh’s Wolverines.

Michigan is a unit that looks to clog gaps and stack the box with extra bodies. While Illinois’ front five also deserves a tip of the cap, Brown’s crack for creating his own holes showcased itself throughout the afternoon. It came via a combination of patience and explosiveness. ‘Slow to and quick through’ was the name of the game for Brown, who averaged nearly nine yards a touch (six carries) when asked to carry the ball off the outside shoulder of the right tackle. In a wide-zone concept from the front five that allows Brown to either stretch the defense horizontally to the boundary or cut it back inside toward the mess of the second level, his footwork and vision were artistry in motion to study.

The nation’s leading rusher punches it in and its all tied up in Ann Arbor 🏈pic.twitter.com/2S2lPmOI14

Brown is also not afraid to run through defenders. And while his frame suggests a talent that looks to win via his wiggle in open space and burst in open grass, powering through arm tackles and consistently gaining positive yards before being brought down is a massive plus in his deep bag of traits. He totaled a tick over three yards a carry after contact against Michigan, forced four missed tackles, and accumulated 91 total yards after a defender first made contact. It’s tough sledding in the trenches, and Brown has thrived inside the metaphorical phone booth that is the line of scrimmage.

One of the country’s most dominant rushers this fall, enjoy his game while it lasts as a talent that could find himself on your favorite team come April. The Fighting Illini’s second-leading rusher in program history (3,145 yards), Chase Brown’s powerful yet patient and explosive style has raised the eyebrows of many across the NFL draft landscape.