LSU’s Adam Miller was at SEC media days Wednesday. A year earlier, he was crumpled on a court. | LSU 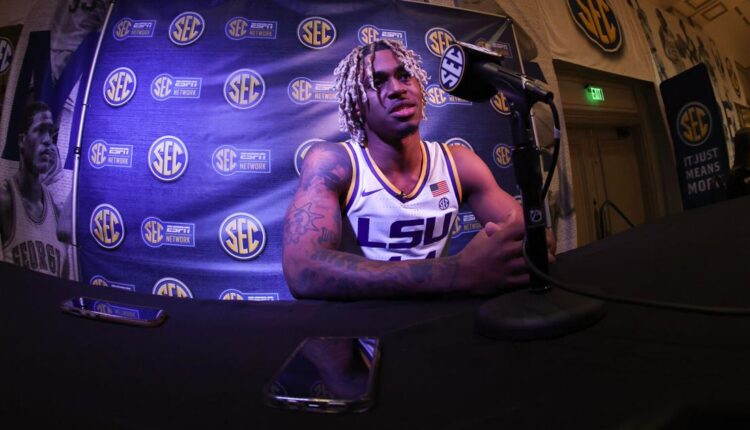 BIRMINGHAM, Ala. — Adam Miller took a seat behind a microphone at Southeastern Conference basketball media days Wednesday morning before taking a second to mark a momentous occasion for him.

“It’s been a long time since I’ve been on a podium,” Miller said as he managed a slight smile.

Seconds later, LSU’s sharpshooting guard explained it was one year to the day that he wrecked his right knee during a preseason practice — a torn ACL ending the Illinois transfer’s first season with the Tigers before it began.

Instead of shying away from talking about his lost season, the affable Miller didn’t mind looking back with a long-awaited LSU debut just three weeks away.

To be sure, it was a long climb back — both physically and mentally — for the 6-foot-3, 190-pounder from Peoria, Illinois.

Miller said he’s all the way back after a grueling rehab process with trainer Shawn Eddy and the medical staff. As a result, he’s more than ready to pick up where he left off Oct. 19, 2021.

“Definitely, recovery was the first thing on my mind. They weren’t lying when they said it was going to be more mental than physical.”

It was easy to see that getting through the devastating injury wasn’t the easiest thing he’s ever done.

“It was kind of crazy for me to go through all that,” Miller said. “You know, it was some dark times. I was able to find myself and pick myself up and make myself a better man, (and) a better teammate.”

Making progress has been the goal since receiving the go-ahead to take the training wheels off and go full-speed in practice nine weeks ago.

“I’m just trying to build up consistency and get better and better, and keep finding ways to improve my team and myself. I have to believe in myself and continue to push myself and allow myself to be the best I can be.”

Aside from the injury and the lengthy road back, that he would be at SEC media days with coach Matt McMahon and teammate KJ Williams wasn’t a given after putting his name in the transfer portal in April.

But Miller — who was named to the Big Ten’s All-Freshman team in 2021 before earning a spot on the USA U19 World Cup team that won gold — said he knew he was returning despite the firing of coach Will Wade.

Still, his big announcement in mid-May that he would be back certainly was a relief to LSU fans.

“The moment I got to LSU, I loved the culture … I loved the vibe,” Miller said. “When I hit the portal for the second time, it was something in my head. I’m like, ‘I can’t go. I want to stay here and make some history.’

“I wanted to be at LSU, and to not be able to prove myself last year, that was really stinging me when I was out. Now, I finally get the chance to show everybody who I am and what I’m capable of.”

Miller admitted he cried when Wade was fired after the school received a notice of allegations in March detailing recruiting irregularities within the program.

“That was the hardest time for me. I felt like I really had nothing,” he said before noting that his mother, Andrea Garry, helped get him through the tough times. “I’m in the portal, and I’m hoping people still believe in who I was.”

McMahon did, of course, and it didn’t take long for him to let the talented guard know that he wanted him to come back.

“Adam’s been awesome,” McMahon said. “I have only been with him seven months; relentless competitor, very tough.

“I have great admiration for his work ethic, commitment and discipline to get back from a devastating knee injury. I’m really excited about him.”