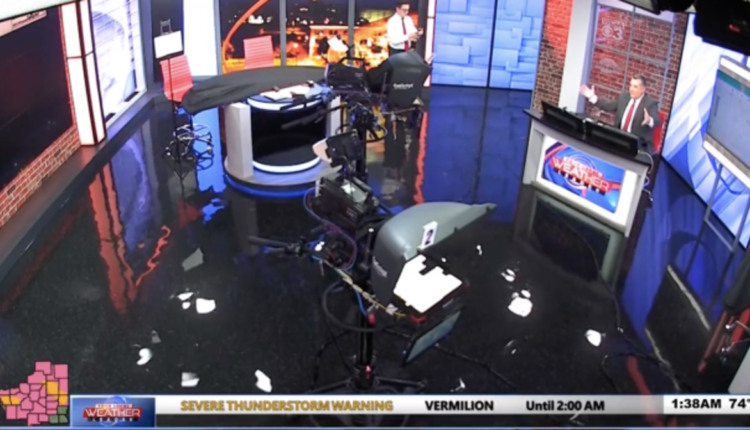 Two broadcast meteorologists in central Illinois found themselves ankle-deep in water early Monday morning when their studio flooded during coverage of the local weather.

Chief meteorologist Kevin Lighty and meteorologist Jacob Dickey of the local channel WCIA 3 continued their coverage of heavy thunderstorms rolling through parts of Illinois Monday even as water poured into the studio.

“There’s literally a lake—there’s a lake that’s in the studio right now because of all of the heavy rainfall here that came in,” Lighty said while on air, with the camera switching to an overhead view of the studio. Water was pooled across the floor, threatening to damage the equipment. The newsroom and control room also saw flooding.

“I can’t believe that we’re still able to do what we’re doing here right now,” he continued. “Our online stream is messed up, but we’re still on TV here with you guys.”

At one point as cameras kept rolling, Lighty can be seen nearly slipping as he trudged through the water in the studio.

Lighty said that if the water had risen one more inch, it would have caused “real trouble,” reaching the equipment and shutting down the broadcast.

The storms unleashed roughly 1.75 to 2.25 inches of rainfall across Champaign, Illinois, within 60 to 90 minutes, according to AccuWeather Meteorologist Mary Gilbert. She added some locations had even recorded up to 3 inches of rain within the same span of time.

“Rainfall rates were close to 1-2 inches an hour, which is enough to cause flash flooding even in areas that can accommodate heavier rainfall,” Gilbert said. “As the thunderstorms rolled through, wind gusts of 30-45 mph were recorded at Champaign’s Willard Airport.”

In a tweet, Lighty said that some 4 inches of water had flooded the studio, and in a second tweet he showed how the water line that stained the green screen measured up to a foot.

So… current situation at the TV station. During our severe weather coverage tonight we had torrential downpours and water has flooded the station. We stayed in the air despite 4” of water flowing into the studio. Checked that one off the bucket list. Studio flooding live on air! pic.twitter.com/eEEPvHUtXf

“Now some of that may be exaggerated from some walking through and kicking up the water but still it was a bad scene last night in the studio,” he wrote, including photos of him holding a ruler to the water line.

In a typical thunderstorm, Lightly said the studio’s location might get a half inch of rain, or even an inch if the storm was “a good one.” On Monday, however, he estimated they received triple that amount and the excessive rain poured down over a short time frame. The studio is located in a low-lying area which allows water to flow easily into the vicinity, he explained.

The National Weather Service had issued a severe thunderstorm watch for the majority of central Illinois, including Champaign, Sunday night, which was set to expire around 4 am local time. The severe weather churned up a small tornado, produced damaging winds, and delivered tennis ball-sized hail in some locations in central Illinois, which WCIA 3 had been covering at the time of the incident.

“We just had very potential life-impacting storms with tornadoes and hail and high winds that were just to the west associated with the same storm system that was on top of us at the time, so we had a job we had to do,” Lighty said. “That’s what we do—we pass along information to as many people as we can and this information was still important.”

Produced in association with AccuWeather.

This story was provided to Newsweek by Zenger News.

Welcome to the Prairie – thePROSPECTUS

KHN’s ‘What the Health?’: Biden Declares the Pandemic ‘Over’