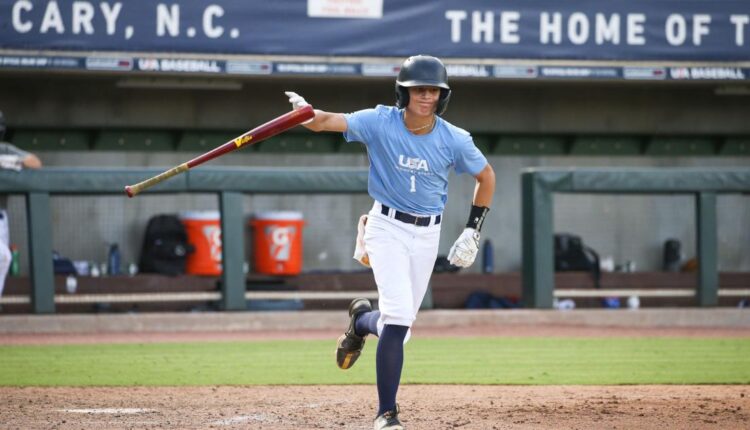 Connor Mitchuson, a sophomore at McLean County High School, participated in the USA Baseball National Team Identification Series this past week in Cary, North Carolina. Mitchuson is the son of BJ and Andrea Shelton.

The National Team Identification Series is the most comprehensive player identification program offered by Team USA. Launched in 2009, the program was created to provide all athletes from across the United States an opportunity to compete for a spot on a USA Baseball national team.

Players participated in selection events and tryouts on the state and regional levels with the aim of ultimately being named to their respective regional team. There are two teams from each region (South, Southeast, Southwest, Northwest, Midwest, and Northeast). The teams from the Midwest region are called the Stars and the Stripes.

Mitchuson traveled to Lexington earlier this year to the state level tryouts where he advanced to the regional level held in June in Champaign, Illinois. He was notified in July that he made the 16U Midwest All-Region Stars Team and would be playing in the USA Baseball National Team Identification Series Champions Cup at the National Training Complex and Thomas Brooks Park in Cary, North Carolina.

The NTIS Champions Cup is the annual culminating event of the National Team Identification Series. The event features 12 teams per age group and athletes participate in workouts and a head-to-head championship-style tournament while being evaluated by college and university coaches and professional scouts.

The event in North Carolina ran August 10-14 and Mitchuson’s team, the 16U Midwest Stars went 1-3 for the week. All three losses were by a very narrow margin, coming up short by a total of only five runs over all three games.

Mitchuson is a varsity member of the MCHS baseball team where he has played all nine positions on the field. He played catcher and right field for the Stars last week.

“It was an experience of a lifetime playing with and against the best players in the United States,” he said. “I have learned what it takes to take my game to the next level. I made new friends from all over the Midwest Region and made some great contacts with college coaches who will hopefully pay off in the future.”