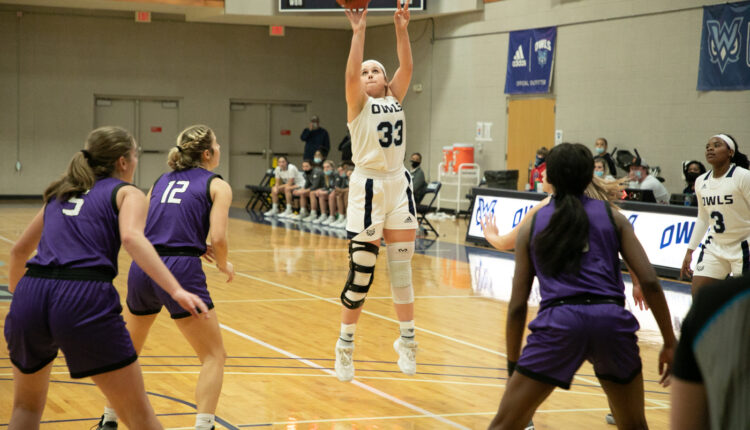 BIRMINGHAM, Ala. — The Mississippi University for Women women’s basketball voyage into the 2022-23 season encountered the perfect storm as it pulled out of the dock, suffering a 124-70 defeat at Birmingham-Southern College. It was the season opener for both the Owls (0-1) and Panthers (1-0).

Things just did not go in MUW’s direction the entire evening. Entering the contest with eight available players — The W has two injured players and guard Hannah Duran is still with volleyball — MUW could not counter BSC’s platoon substitutions of fresh bodies every couple of minutes. All-American MG Chamberlain was limited to seven first-quarter minutes after suffering a leg injury, three Owls fouled out, and the result was less than ideal for visiting MUW — especially versus the Panthers’ high-octane style on offense and pressing defense until the waning minute of the fourth quarter.

There were a couple bright spots for The W in the debut of newcomers Jas Patrick, Conley Langford and Reagan Sonnier. Patrick had a double-double in her inaugural outing as an Owl. She scored a game-high 24 points, making good on 7 of 15 field goals and grabbing 10 rebounds. Patrick also dished out three assists and had a blocked shot.

Langford added 21 points and six boards. Sonnier also had a double-double in her first contest as an Owl, scoring 12 points and corralling a game-leading 11 caroms.

Sophomore Bre Waters gave out seven assists to top The W. Waters and Jaycee Haynes each had a pair of steals.

The Owls will continue their busy week — which also included an exhibition game last Monday — when they travel to St. Louis for the Webster Classic on Friday and Saturday. MUW faces Aurora University (Illinois) on Friday, before taking on either the University of Dallas or host Webster on Saturday.

Quality, in-depth journalism is essential to a healthy community. The Dispatch brings you the most complete reporting and insightful commentary in the Golden Triangle, but we need your help to continue our efforts. Please consider subscribing to our website for only $2.30 per week to help support local journalism and our community.