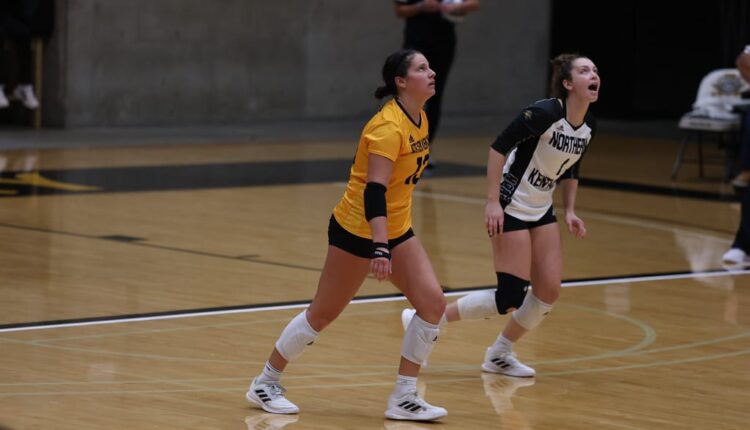 The Norse led 7-1 during the third set but the Phoenix came back to win it.

Senior specialist defensive Anna Burke had 14 digs, one ace and three assists for the Norse. Junior setter/right side hitter and Holy Cross alum Torie Houston had 13 assists and four digs.

“I thought we did a better job serving. We missed 10 serves (Friday) and didn’t have that many aces,” said Liz Hart, NKU head coach. “We did a better job (Saturday) of putting pressure on (the Panthers), but still keeping the ball in the court minus the third set. We had huge balance in our offense. We keep setting to pins. We wanted to get the middles involved more. That makes us harder to defend.”

Brinkmann had 14 kills, two aces and two blocks. But the Norse received a huge lift offensively from sophomore middle blocker Sequoia Hunt with 13 kills and six blocks on a .565 hitting percentage. The blocks and hitting percentage are season-highs for Hunt.

The Norse knew they’d have a challenge with the Panther hitters led by 6-foot-1 junior middle blocker Ari Miller among others. She had 16 kills.

“Our hustle plays bring us energy, which brings our success and our wins so when we’re out there hustling and keeping the ball up, we get the set and we get the kill,” Burke said. “That’s huge for us. Our blocking has been so consistent even from last year. We just build on that. That’s a huge point of emphasis in practice because we are known for our blocking schemes. I trust our outsides and middles to get there (at the net). That’s let us get into position to get those balls up for them.”

A number of other Norse contributed. Sophomore outside hitter Joy Banks finished the game with a block in the fourth set. Briggs had 11 kills and Banks had 10 to go with one solo and four assisted blocks. Junior middle blocker Allie Siefke (Cincinnati, Ohio/Saint Ursula) added three kills, two solo and two assisted blocks.

“It was just about knowing who was up there like Ari (Miller) for example knowing what she is strong at, knowing what angles to take away,” Banks said. “I just think we did a good job of seeing their approach and just attacking them on the net with blocking and stuff.”

The Norse take on rival Wright State on Tuesday back at Regents Hall. Game time is 6 pm

Both teams had their chances. The Norse outshot the Colonels, 20-11 including 6-5 on goal had had six corner kicks to two for Robert Morris. Graduate student goalkeeper Mimi Stines made five saves. A defensive miscommunication led to an own goal for the Colonels in the second half.

The Norse scored just their fourth goal this season when 2020 Highlands graduate Maria Wiefering scored with 13:49 left in the first half. That is Wiefering’s first goal of the season and second career collegiate goal.

The Norse travel to the University of Purdue at Fort Wayne on Thursday. Game time is 7pm

The Norse men’s and women’s teams competed in the Live in the Lou Cross Country Classic at EP State Park. The women took 17th out of 47 teams and the men took 22nd out of 45 teams.

Fifth-year senior and Simon Kenton graduate Kyle Mastin led the Norse taking 12th overall in 24 minutes, 32.9 seconds. He just missed out on a personal best, and that time marked the best finish from anyone in the Horizon League.

The NKU women saw senior Megan Cole also place the highest individually out of the Horizon League. She took 24th in 18:21 missing out on a personal record by 10 seconds.

Both teams will be off from competing for a week before running Friday, Oct. 14. Groups will run in the Bradley University “Pink” Meet at 1 pm at the Newman Golf Course in Peoria, Illinois. Others will run in the Jenna Strong Invitational at 4 pm at the Wilmington (Ohio) Cross Country Course.

The Northern Kentucky women’s golf took 10th out of 10 teams in the Briar Ridge Invitational at the Briar Ridge Country Club in Schererville, Indiana. The University of Illinois-Chicago played host to it.

Freshman Hailey Coleman led the Norse again ending with a two-day score of 157 to finish in a tie for 23rd. Coleman had 23 pars during the event leading the Norse. That was third-most for the event.

sophomore Reagan Nolan had another solid showing with a score of 160 good for 32nd overall. Nolan finished second on the team with 19 total pars and three birdies.

Northern Kentucky continues fall competition in the Butler Fall Invitational from the Highland Country Club in Indianapolis, Indiana. It tees off Monday, Oct. 3.