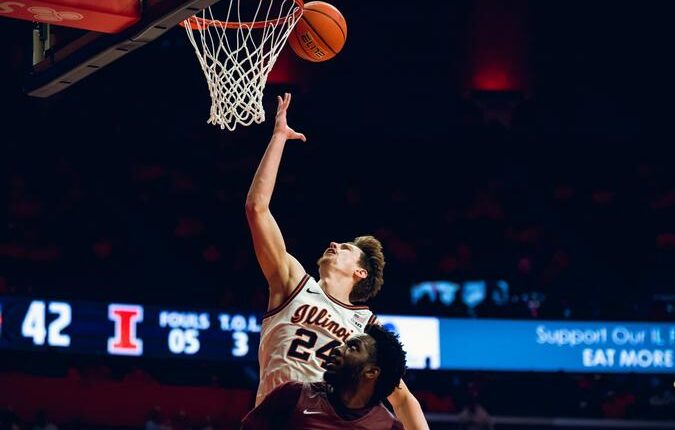 Terrence Shannon Jr. finished close behind Mayer with 18 points while Sencire Harris led the Illini (8-3) with a career-high eight rebounds.

A quick offensive start from both Mayer and Shannon Jr. pushed the Illini to a 14-7 lead in the first seven minutes of the game.

In his starting debut, freshman Jayden Epps broke up a short scoring drought for Illinois with a jumper, propelling the Orange and Blue to a 24-11 advantage early in the first half.

Coming out of the locker room, Alabama A&M (4-7) mounted a comeback effort on the heels of a 16-0 run that cut the Illini lead to 39-37 with just under 11 minutes to play. But Coleman Hawkins snapped the Illinois scoring drought with a pair of free throws at the 10:46 mark, sparking a 15-2 Illini run that pushed the lead back to double figures.

The Illini now turn their attention to Thursday’s matchup vs. rival Mizzou in the McBride Homes Braggin’ Rights game at the Enterprise Center in St. Louis. Tip off is set for 8 pm CT.

“Defensively, I thought we did some really great things today. It was nice to get back and see that, it’s been something we’ve spent a lot of time on in practice. It’s always a good job when your opponent is shooting 33% from the three-point line, which is nice to see after the Penn State game.RJ (Melendez) hasn’t practice most of the week with a shoulder contusion;I thought defensively he was outstanding on the defensive help.

We struggled offensively then Matt took it over in the last 10 minutes of the game, which showed how much of a great player he is. Terrence was great defensively. We’ve been going at it, it’s been a hard week with finals and the first time we’ve had extensive practice time in awhile, so we have to clean some things up offensively. We looked good, moved the ball in the first half and then in second half we had the dry spell but onto the next one.”

IceHogs tame the Wolfpack with 3-2 win