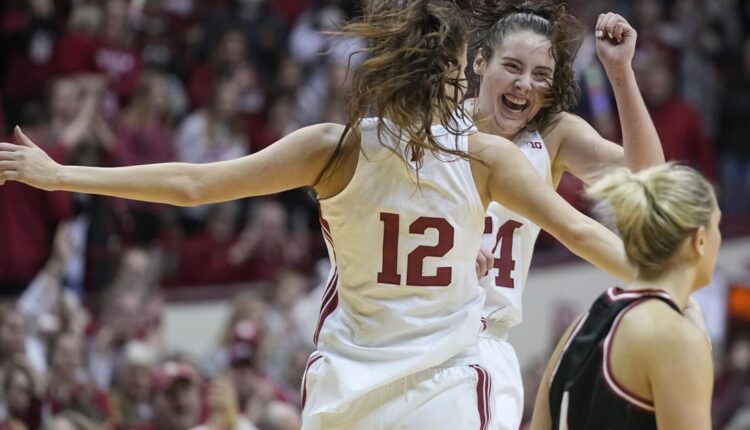 Mackenzie Holmes scored 22 points, Sydney Parrish sank the go-ahead 3-pointer and No. 4 Indiana bounced back from its first loss with a 74-62 overtime victory over Nebraska on Sunday in Bloomington, Indiana.

Indiana outscored Nebraska 12-0 in overtime after the Cornhuskers’ Jaz Shelley missed a potential game-winning jumper in the final seconds of regulation.

Sonia Citron tallied 15 points to go with six rebounds and four assists for the Fighting Irish (12-1, 3-0).

Georgia Woolley of Syracuse had a chance tie the game with five seconds to go, but converted just one of two free throws to cut the deficit to a point at 55-54. The teams traded turnovers in the final seconds and the Wolfpack’s Saniya Rivers hit a free throw with one second left for the final margin.

Camille Hobby scored 12 points to lead the Wolfpack (12-2, 2-1 Atlantic Coast Conference), who won their sixth straight against Syracuse and bounced back from a loss to unranked Duke on Thursday.

Amoore finished with a game-high 24 points, connecting on 7 of 17 from the floor, including a career-high six 3-pointers for the Hokies (12-2, 2-2 Atlantic Coast Conference), who registered their first victory over a ranked team this season.

(9) LSU 88, Vanderbilt 63: In Baton Rouge, Louisiana, Angel Reese had 21 points and 17 rebounds to maintain her streak of double-doubles in every game this season, and LSU remained unbeaten with a victory over Vanderbilt.

The Bruins (13-2, 2-1 Pac-12) had their six-game winning streak snapped. They played without leading scorer Charisma Osborne, who suffered a shoulder injury in the team’s previous game.

Kiki Rice led the Bruins with 20 points, Gina Conti had 19, and Londynn Jones finished with 17.

(11) Utah 61, Washington 53: In Seattle, Gianna Kneepkens scored 18 points and Utah pulled out a win over Washington to remain undefeated.

(17) Oregon 73, USC 45: In Eugene, Oregon, Endyia Rogers had 19 points, six assists and three steals against her former team and Taya Hanson had season highs with 17 points and five made 3-pointers to help Oregon beat USC.

Rayah Marshall led USC with 14 points and 11 rebounds but made just 3 of 15 from the field.