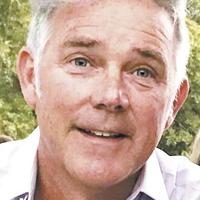 He was born April 22, 1964, in Murray and was the co-owner and operator of the Crew Hair Salon in Murray. He was a member and former deacon of the Locust Grove Baptist Church.

He was preceded in death by his father, Don Murdock.

The JH Churchill Funeral Home & Cremation Services is in charge of arrangements.

Born May 28, 1940, in Peoria, Illinois, she was the daughter of Lawrence and Evelyn (Lundvall) Johnson, and loving wife of Alan L. Bussey.

Jan was named Miss Majorette in 1957 at Woodruff High School, in Peoria before graduating in 1958. She received her nursing degree from St. Anthony’s Hospital School of Nursing and passed her State Boards in 1969. Being an RN meant she was able to utilize her kind and compassionate spirit, bringing nurturing care to her patients.

After marrying Al, they raised four children, and were fortunate to have lived and traveled around the world. In recent years, Jan could be found watching birds from her back porch, working on jigsaw puzzles, and reaching into the candy dish which was never far from her side in order to satisfy her sweet tooth. Jan was an incredible cook and baker, and self-published her own cookbook which included recipes that highlighted her love of cooking over the years.

She was a kind and gentle woman, a daughter, sister, wife, mother, aunt, grandmother, great-grandmother, as well as a life-long caregiver.

She was preceded in death by her husband, Alan L. Bussey; her parents, Lawrence and Evelyn (Lundvall) Johnson; and a brother, Kimmet Johnson.

Online condolences may be left at www.olsonfh.com.

Olson Funeral & Cremation Services of Rockford is in charge of arrangements.

Born Feb. 19, 1942, in Bumpus Mills, Tennessee, she was the daughter of JC “Buster” Kingins and Annie Pearl Carr Kingins, who preceded her in death.

She graduated from Austin Peay State College in 1964 and later earned her master’s degree from Murray State University. She began her teaching career in Christian and Caldwell counties before landing at Trigg County in 1970, where she was a beloved high school science and biology teacher for many years. After retiring from Trigg County Schools, she went on to teach in the Clarksville, Tennessee school system for a number of years before obtaining her real estate license and beginning a second career as a realtor with Coldwell Banker.

She was a proud Grandma and a member of Salem Baptist Church in Murray. An avid reader and true nature enthusiast, she enjoyed bird watching and nature photography, and could correctly identify any tree by its leaves.

Goodwin Funeral Home, Cadiz, is in charge of arrangements.

He retired as a machinist for Caterpillar, Inc., and was a member of West Murray Church of Christ and the Calloway County Fire Rescue.

In addition to his parents, he was preceded in death by his wife, Toni L. Fancher; one sister, Laura Elizabeth Fancher; and one brother, Richard Fancher.

The funeral service will be at 1 pm Friday, Oct. 21, 2022, at the JH Churchill Funeral Home & Cremation Services with John McKee and David Morrison officiating. Burial will follow in Salem Cemetery. Visitation will be from 5-8 pm Thursday, Oct. 20, 2022, at the funeral home.

Online condolences may be left at www.thejhchurchillfuneralhome.com.

The JH Churchill Funeral Home & Cremation Services is in charge of arrangements.

Born June 19, 1959, in Mendota, California, she was the daughter of Rev. James M. Harris and wife Jean of Sharon, Tennessee, and Ruby Wann Harris, all who preceded her in death.

She was a retired manager of Discount Tobacco City, and was a member of the Murray-Calloway County Senior Citizens Center. She served as a song leader at several churches throughout her life. She was currently a member of Light House Ministries of Puryear, Tennessee.

She was preceded in death by her mother.

The funeral service will be at noon Saturday, Oct. 22, 2022, in the chapel of Blalock-Coleman Funeral Home with Robby Moore, Steve Peal and Bill Barger officiating. Burial will follow in Murray City Cemetery. Visitation will be after 10 am Saturday, Oct. 22, 2022, until the funeral hour at Blalock-Coleman Funeral Home. Pallbearers will include Dustin Guidry, Jeremy Barger, Michael Barger, Dylan Barger, Sean Barger and Brent Martin.

Online condolences may be left at www.blalockcolemanfuneralhome.com.

Blalock-Coleman Funeral Home & Cremation Services is in charge of arrangements.

The funeral service is at noon Thursday, Oct. 20, 2022, at Salem Baptist Church. Burial will follow in Salem Cemetery.