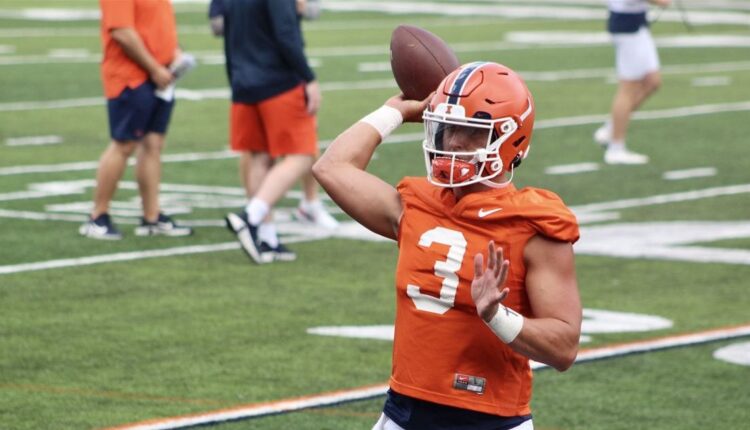 CHAMPAIGN — Illinois football will hold a mock game on Friday during which the team will walk through game-day activities. But for all intents and purposes, Thursday was the Illini’s final training camp practice of 2022 before starting game-week activities to prepare for its Aug. 27 season opener against Wyoming.

Illinois coach Bret Bielema said the team started Wyoming prep “full throttle” on Thursday and that the team is coming out of camp “overall pretty healthy.”

So after three weeks of intense evaluation, Bielema and his staff know their team pretty well. Unlike some teams, Bielema hasn’t released a training-camp depth chart (why not keep Wyoming guessing?) and Bielema has said he may not announce a starting quarterback until an hour or so prior to kick-off against the Cowboys.

Yet, internally, the depth chart is becoming pretty clear with a few lingering position battles.

“I would say the offense, defense and special teams, we know who the guys are,” Bielema told Illini Inquirer on Thursday. “I think there’s still some battles offensively and defensively that you would say fortunately or unfortunately. Like at inside linebacker, we got three guys that we think can be starting linebackers. A number of guys probably at the nose position on defense. I think at corner, battling it out. [Devon Witherspoon] has probably established himself. The other guys are battling it out. [Tahveon Nicholson] had an incredible camp. The offensive got probably seven guys that are in that mix and what the best way to put those together. Tight end, Luke [Ford] should be back with us tomorrow. We’ll see where that plays out. Wide receiver … that’s probably been the most significant change with the way those guys are catching it. And obviously quarterback with Tommy [Devito] and Art [Sitkowski] and actually Ryan Johnson probably had his best day today.”

Illini Inquirer and other Illini beat reporters were only privy to one full training camp practice and then several other 10-minute slices of camp throughout the last month. But we have gathered a lot from the coaches, so here is our best guess at the Illini football 2022 depth chart.