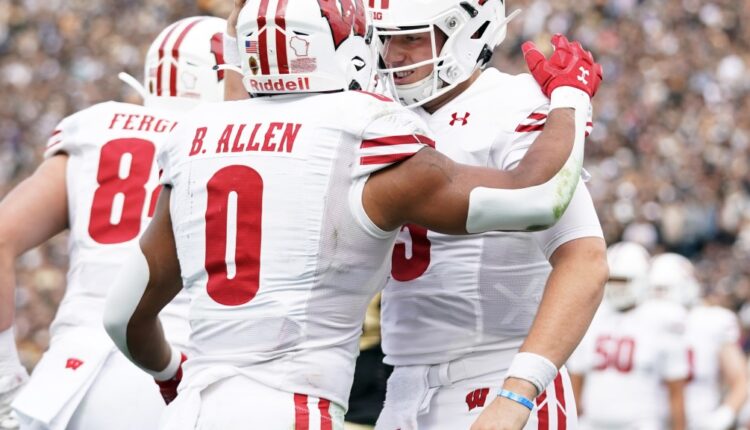 Wisconsin is readying to take back the Big Ten West title in 2022, but will their schedule allow them to do so?

The Badger calendar is a mixed bag next season. You draw Ohio State out of the Big Ten East, but the three non-conference matchups aren’t expected to give Wisconsin serious trouble. Last season, the Buckeyes were nowhere to be found on the schedule, but Notre Dame handed the Badgers a non-conference loss at Soldier Field.

In 2022, the Badgers can ease into things in a different way. 2021 brought the challenge of opening the year with a premier Big Ten opponent in Penn State. Neither offense looked sharp in a close, sloppy game that Wisconsin ultimately dropped. This time around, the Badgers will see Illinois State in the comfort of Camp Randall to begin the campaign.

While a road matchup at Ohio State is clearly the toughest battle on the schedule, where do Wisconsin’s other opponents line up? Here is a look at our BadgersWire rankings of the Badgers’ 2022 games, going from easiest to hardest:

Wisconsin’s first game of the season lands as the easiest matchup of the season. Illinois State is an FCS program coming off of a 4-7 season in which they struggled mightily to generate enough offense (shut out twice last season). Expect Wisconsin’s defense to cruise early and often.

Did I mention that dating back to 2002, Wisconsin is 49-2 against out of conference opponents? Expect that trend to continue when the Badgers meet an Aggies team led by head coach Jerry Kill. Kill’s teams of the past largely reflect what Wisconsin likes to do: run the ball, control the clock, and grind out wins behind the offensive line. The personnel is still a work in progress for the Aggies.

2022 was a strange campaign for Bret Bielema in his return to the sidelines. In absurd overtime fashion, the Fighting Illini pulled off a win at Penn State, but also had home losses to UTSA and Maryland. The Badgers thumped the Illini at Camp Randall a year ago, and even with a new offensive coordinator in Barry Lunney Jr., Wisconsin will have a good chance to blank the Illini offense for a second straight season.

It’s hard to trust Maryland’s defense, but Taulia Tagovailoa and the Terrapins offense can certainly cause problems. With this game falling at home, and Maryland generally struggling against the top half of the conference on both sides of the ball, it comes in at No. 9 on the list.

Nov 13, 2021; Madison, Wisconsin, USA; The Wisconsin Badgers line up for a play during the fourth quarter against the Northwestern Wildcats at Camp Randall Stadium. Mandatory Credit: Jeff Hanisch-USA TODAY Sports

The first road contest on the list is the Badgers taking a trip to Northwestern. It’s probably foolish not to have this ranked later on, but the Wildcats don’t have a good option at quarterback (Ryan Hilinski or Brendan Sullivan) and the offense isn’t showing any signs of improvement on paper. It’s still a trip to Northwestern, which never leaves Badger fans feeling confident.

MINNEAPOLIS, MN – NOVEMBER 27: Head coach Paul Chryst of the Wisconsin Badgers looks on against the Minnesota Golden Gophers in the second quarter of the game at Huntington Bank Stadium on November 27, 2021 in Minneapolis, Minnesota. (Photo by David Berding/Getty Images)

Remember that stat about Wisconsin being 49-2 at home against non-conference opponents since 2002? Well, here’s the only potential for a third loss in that category on the 2022 schedule.

Washington State has become a serious contender in the Pac-12 North over recent years, even though those divisions don’t exist anymore (the Pac-12 scrapped divisions this offseason). The Cougars defense dominated a number of opponents last season and should be solid again in 2022. Incarnate Word transfer quarterback Cameron Ward follows his old head coach Eric Morris to Washington State as the duo looks to recreate their 2021 magic. Wisconsin’s defense will be in for an early-season test.

Aidan O’Connell will look to be one of the top quarterbacks in the Big Ten, but he won’t have David Bell to throw to. George Karlaftis is a massive loss along the defensive line after he heads to the NFL alongside Bell.

The Boilermakers struggled to take care of the ball last season, and will need better from O’Connell and the offense in that regard.

Wisconsin looks to get Paul Bunyan’s Ax back in late November against a Minnesota team that has quarterback Tanner Morgan back alongside star running back Mohamed Ibrahim.

The Gophers were arguably the most up and down team in college football a year ago, but their season finished up with a win over the Badgers. There will be nothing easy about Minnesota’s trip to Camp Randall.

Is this the year? Following a 3-9 record that didn’t do their team justice, Nebraska and Scott Frost regroup behind new offensive coordinator Mark Whipple.

With nearly an entirely new offensive staff, the Huskers will likely turn towards Texas transfer Casey Thompson at quarterback. A road matchup in Lincoln is never a walk in the park, but Nebraska has been unable to stop Badger running backs in recent years.

Iowa still has major offensive questions, no matter if Spencer Petras or Alex Padilla start at quarterback. The defense will once again be near the top of the conference, and a visit to Kinnick Stadium always proves difficult.

Don’t expect points when these two get together in November.

Michigan State head coach Mel Tucker talks to players during a timeout during the second half against Ohio State at the Spartan Stadium in East Lansing on Saturday, Dec. 5, 2020. Credit: Junfu Han-Imagn Content Services, LLC

Can Michigan State follow their 2021 act with a solid sequel? Many of the key contributors are back, including quarterback Peyton Thorne. Losing Kenneth Walker III to the NFL is a significant blow, but a familiar face in Jalen Berger will look to replace some of his production. Expect a battle in East Lansing.

It doesn’t get any easier than ranking a road game against Ohio State as the hardest matchup on Wisconsin’s 2022 schedule. CJ Stroud will be in the Heisman conversation all year long, and will be throwing to arguably the best wide receiver in the country in Jaxon Smith-Njigba.

The Badgers will have to have everything go right and then some to pull off a shocker in Columbus.