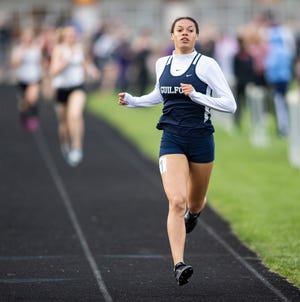 HUNTLEY — The Guilford Vikings advanced to state in seven events, the most in program history, as the track and field postseason kicked in with the Class 3A Huntley Sectional on Wednesday evening.

Led by junior Jolena Sites, who soared to state in all four events she took part in, and freshman shot putter Natassja Bowman, who bolted to state on her first try with a school record toss, the Vikings were constantly in the spotlight on Wednesday night. And now they head to next week’s state track and field meet in Charleston, which runs May 19-21, with state-medal aspirations.

“We knew this was going to be a tough sectional, but we believed in these girls, and man did they come through,” Guilford coach Greg Ford said. “We have so many weapons on this team right now, and I didn’t doubt them one bit. They just kicked it in today.”

The top two finishers in each event, and those that better the state standard time or distance, advanced out of sectionals and on to state.

Bowman threw the shot 35-5, which not only gave her the sectional title, but also set the first Guilford school record of the day.

“I needed it because I wasn’t really on before that,” she said. “That one felt pretty perfect, though. That’s what I needed, to really pop one like that. It felt amazing.”

Another Guilford junior, Michelle Gasmund, advanced to state with a time of 2:19.22 while placing third in the 800 run. Gasmund was also a key part of Guilford’s 4:04.54 in the 4×400, which gave them a second-place finish, and their seventh and final state bid.

State qualifiers: (Other than Guilford’s seven events, here are the rest of the area state qualifiers from 3A) Harlem senior Emma Rich took first in the discus at 119 feet, 1 inch; Auburn sophomore Essence Horton-Graves took first in the 100 dash in 12.16, and took third but advanced on time with a 25.59 in the 200; Harlem senior Hannah Bilodeau took second in the 400 run in 57.98; Hononegah junior Indigo Sterud took second in the 300 hurdles in 47.05

Near misses: Belvidere North senior Gloria Oteng-Bediako, who placed third in the triple jump at state as a freshman but hasn’t medaled since, scratched on all of her sectional triple jumps on Wednesday, and took 13th in the long jump as her career came to a quiet close; Guilford senior DeYana Franco-Daye also fell 1 inch and one placement short of advancing to state in the high jump with a make at 5 feet; and the Guilford 4×200 crew of Bruce, Aamanda Curry, A’Yana Gray and Gasmund placed third, one spot out of a state bid.

This story will be updated at the conclusion of the Class 1A and 2A sectionals on Friday.

Where to Go Boating with Your Family Near Champaign-Urbana