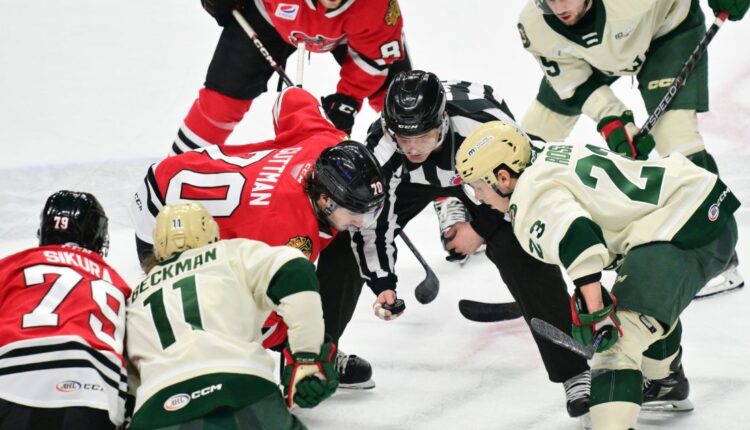 Nearing the end of what looked like two scoreless periods, Iowa struck first late in the second frame. Wild forward Marco Rossi spun 360 degrees to avoid Rockford defenseman Isaac Phillips just in front of the blue line and fired a wrister that snuck past IceHogs goalie Arvid Soderblom at 19:48 to take a 1-0 lead heading into the middle intermission.

The IceHogs tied the contest 1-1 early in the final frame. Guttman batted down a high pass from defenseman Jakub Galvas and weaved between a pair of Iowa defenders to fling a wrist shot between the pads of Wild netminder Jesper Wallstedt at 1:38.

Iowa forward Nick Petan slung the game-winning lamp lighter from high in the slot into the net at 2:01 in the fifth overtime period between the Central Division rivals in the 2022-23 series.

Despite plenty of back-and-forth play in the close contest, there were only six penalties totaling 12 minutes across the board. Five of the six penalties came in the second stanza and one in the first.

Soderblom played his best game in the net since his stint with the Chicago Blackhawks, marking 32 saves on 34 Wild shots, but Wallstedt turned away 24 of 25 Rockford shots to earn the win.

The next home game for Rockford is Tuesday, Jan 31 against the Manitoba Moose at 7:00 pm Enjoy $2 tacos along with margarita and craft beer specials at another Fiesta Tuesday! TICKETS

Man arrested on U of I campus with loaded guns

Country’s Fastest, Slowest Talkers Both Live in Midwest – One of Them in Illinois, Study Shows – NBC Chicago