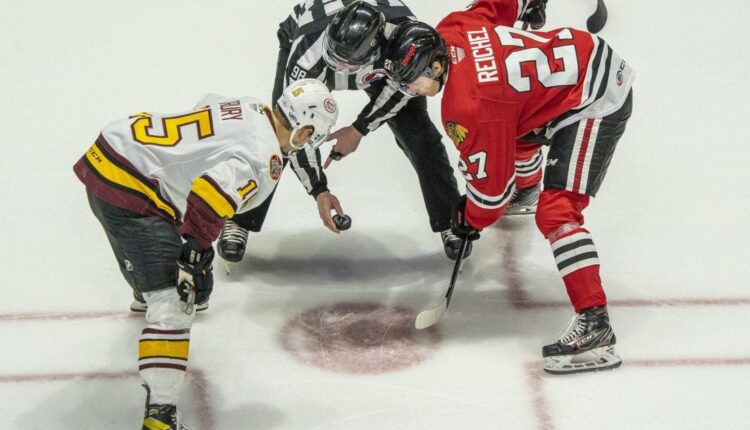 Wednesday, May 4 vs Texas Stars
The Rockford IceHogs took Game 1 of the first-round best-of-three series against the Texas Stars thanks to a pair of goals from forwards Luke Reichel other Carson Gicewicz. Recap & Highlights

Friday, May 6 vs Texas Stars
After 60 minutes and no score, forward Dylan McLaughlin ended the game and series with a goal 56 seconds into overtime to send the Texas Stars home and the IceHogs to the Central Division Semifinals. Recap & Highlights

goaltender Arvid Soderblom Leads the league in the postseason with a .50 goals-against average and .986 save percentage, tied for first with two wins and a shutout and fourth with 69 saves.

defenseman Isaac Phillips is tied for third among AHL blueliners and tied for 20th overall in the AHL with two points (2A).

Forward Carson Gicewicz is tied for first among AHL rookies with a goal and a game-winning goal.

Soder blossoming in postseason
goaltender Arvid Soderblom stopped 69 of 70 shots faced over 121 minutes of action in two games against the Texas Stars to help send the IceHogs to the Central Division Semifinals. The Goteborg, Sweden, native made 33 saves in a 2-1 Game 1 victory and earned his first AHL postseason shutout with 33 saves in a 1-0 win in overtime in Game 2.

Phillips Lends Helping Hand
Defenseman Isaak Phillips earned the primary assist on both game-winning goals for the IceHogs in their two contests against the Stars. He is tied for third among AHL blueliners and tied for 20th overall in the AHL with two points (2A).

How Much Cocaine is a ‘Heap of Cocaine?’ ask This Illinois Trio