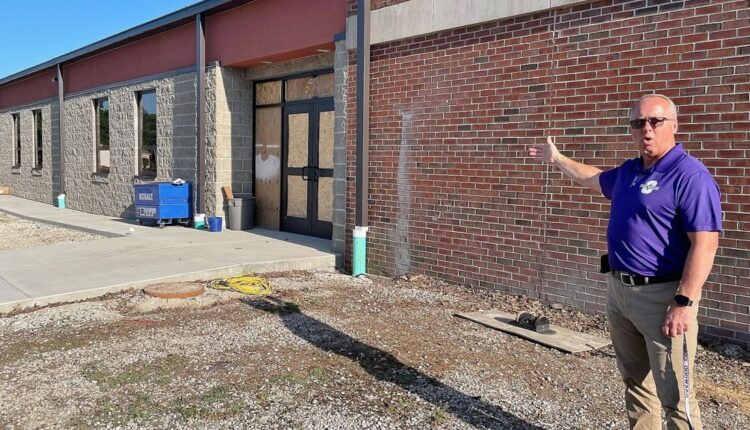 OAKWOOD — The Oakwood Community Unit School District 76 board this week approved putting a referendum question on the ballot again for a county schools sales tax increase.

It’s been rejected twice by voters since 2018.

The board recommended approving the resolution for a One Cent County Schools Facilities Sales Tax. The resolution directs the Vermilion County Regional Superintendent of Schools to certify to the election authorities the question of imposing a retailers’ occupation tax and a service occupation tax to be used exclusively for school facility purposes, school resource officers and mental health professionals, before voters in the April 4 consolidated election.

This again would affect all school districts in Vermilion County.

According to information put together by Oakwood Superintendent Larry Maynard, 56 of 102 Illinois counties passed the CSFST. Champaign County began the tax in 2010 and has provided property tax relief and major school facility improvements since implementation. Those who spend money in Champaign already pay the CSFST and help fund schools in Champaign County, Maynard said.

Since 2007, Illinois voters have had the option to approve a 1percent County Schools Facility Tax (commonly known as a sales tax), that shifts facility funding away from property taxes.

Items that are currently subject to sales tax will be subject to the CSFST (no new items are taxed). Some items are exempt from the CSFST: groceries, medicine, vehicles, mobile homes, ATVs/RVs, seed, fertilizer, farm equipment and parts/inputs.

All financial decisions of how the money would be used are made exclusively by the local school boards of education throughout Vermilion County for each district.

Revenue distribution logistics (enrollment): equally for every pupil that lives in the county and attends public school, regardless of the location of that school.

Each school district in the county would receive a portion of sales tax money that is based on student enrollment. The most recent CSFST revenue projection for Oakwood is estimated to be approximately $601,208 in new money.

How would Oakwood CUSD 76 use the money?

“Ultimately improving educational opportunities for our students is a priority for the district,” according to Maynard.

Items listed in the district’s strategic plan for facilities which provide guidance for how CSFST revenue could be used to accomplish this vision and goals:

Estimated effect on the Oakwood property tax rate and bill:

School districts must adopt the question no later than Jan. 17 and submit the passed resolution to the Regional Office of Education. When school boards representing more than 50 percent of the resident student enrollment in the county adopt resolutions, the regional superintendent must certify and file the public question with the county clerk no later than Jan. 26.

The county clerk will then place the question on the ballot at the next regularly scheduled election, April 4, 2023.

The question on the ballot would read: Shall a retailers’ occupation tax and a service occupation tax (commonly referred to as “Sales Tax”) be imposed in Vermilion County at a rate of one (1) percent to be used exclusively for school facility purposes, school resource officers, and mental health professionals?” A simple majority vote is required for passage.

If approved by voters, money is received monthly beginning approximately four months after the tax goes into effect. The money follows the student.

Maynard said he believes all but one or two school boards in the county have already approved putting the referendum on the ballot again.

The other county school districts do not need Danville’s support because District 118 does not serve the majority of the students in the county. Due to a decline in student enrollment in District 118 since 2014, only about 43 percent of the total number of students in Vermilion County attends District 118.

Maynard is optimistic this time around on it passing.

“There’s been a good response,” he said. “I think a lot of it’s education and informing our community.”

“I think we are hopeful,” he said of the school districts.

Maynard said the reality is that people living here are already paying the tax in Champaign and elsewhere for those community’s schools.

Locally, school districts can use a portion of the tax money to lower bond and interest, lowering property taxes for the public, and the rest of the money can help school districts with aging facilities, he said.

“It’s a win-win for everybody,” Maynard said. “Taxpayers get more back. It’s a win for kids.”

The school districts were approving the question in December and January.

There are 11 school districts in Vermilion County.

“I’m still collecting them” Hird said, about reaching the 51 percent or more of Vermilion County’s student population to seek approval to assess the Illinois County School Facility Tax of up to 1 percent.

Women Set for First Trip to Champaign Since 1991