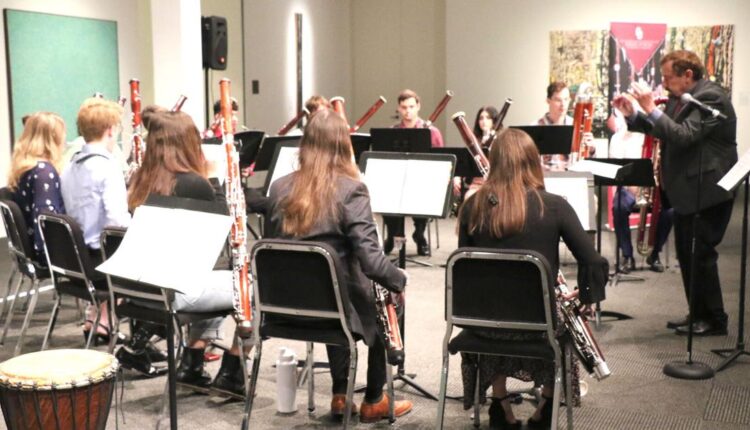 The bassoon is a complex musical instrument. It’s a horn with six parts called bocal, boot, bell, bore, joint and reed. Bassoon history goes back earlier than the mid-16th century but it’s being played vigorously now by the Sooner Bassooners. That’s a 15 student musician ensemble led by Professor Rodney Ackmann at The University of Oklahoma’s School of Music.

Bassoon has been played in virtually all genres of music over the last 200 years from Igor Stravinsky’s “Rite of Spring” to “Gang Signs and Prayers” by UK grime rapper Stormzy. Curiously, bassoon’s overall reputation in musician world is one of a sonic trickster.

“It’s not particularly accurate but bassoon is referred to as the ‘clown of the orchestra’ and we hear that all the time,” Ackmann said. “We often get these bouncy parts that you hear in cartoon music. The most famous one would be ‘The Sorcerer’s Apprentice’ where it’s a major feature in Walt Disney’s ‘Fantasia’ which puts a smile on everyone’s face. It’s a tuneful toe tapper but the bassoon can do so much more. It’s a very lyrical instrument.”

Bassoon has three and a half octaves and contrabassoon a fourth octave, giving the player a lot of range to work with. At times a bassoon’s register may resemble the human voice.

“I’m very fond of the bassoon ensemble and what it can do musically,” he said.

Ackmann is a jovial and enthusiastic chap perfectly suited for inspiring students to excel at playing bassoon. He came to OU in 2012 after teaching for seven years at the University of Missouri.

Ackmann is now the Irene and Julius J. Rothbaum Presidential Professor of Excellence in the Arts, also performs as a member of the Oklahoma Wind Quintet, Norman Philharmonic and as Principal Bassoonist for the Oklahoma City Philharmonic.

“I had a bassoon ensemble at MU and walked into a situation here where there’d already been a Sooner Bassooners since the mid-1980s,” Ackmann said. “I was very fortunate in that and Carl Rath taught my predecessor here for 32 years doing some wonderful things. We’ve had some building to do in terms of numbers and quality. That comes down to recruiting which is part of the job and one I happen to enjoy.”

There were four Sooner Bassooner students in 2012 and in 2023 there are fifteen. This academic year’s ensemble was invited to perform at the highly selective and prestigious Midwest Clinic, International Band and Orchestra Conference in Chicago, Illinois last month. Hundreds of schools apply and Sooner Bassooners were one of only forty chosen.

“It’s wonderful taking students from all different backgrounds, mainly studying bassoon majors with me on a weekly basis, many are all-state bassoonists and bringing all that together with rehearsals and their diverse schedules can be a challenge,” Ackmann said.

Presently Sooner Bassooners is a group almost evenly divided between the sexes hailing from California to Peoria, Illinois. Some of these students are astrophysics or journalism majors but happen to play bassoon. Ackmann learns from them.

“That’s one of the best parts,” he said. “This group became more collaborative within themselves, always with the highest degree of respect. A freshman could raise their hand and say ‘I think we’re too loud here’ or it could be a graduate student. They’re all chipping in. Let’s hear it, we can try it and usually it does help. So their perspective is wonderful and they do work together. My challenge is knowing when to lead and when to stay out of the way.”

So far this iteration of the Sooner Bassooners have performed publicly on four occasions. The logistics of fifteen musicians with somewhat unwieldy instruments in certain performance spaces can present problem solving opportunities.

“They love performing and for the School of Music’s Mosaic concert they were positioned in the balcony above the main stage at Sharp concert hall,” Ackmann said. “It presented some logistical challenges because they need to be able to see and hear each other with a little elbow room. We had to really finesse it to create that arc. By performance time we figured out a way to make it comfortable.”

“That was 90 seconds of exhilaration for all of us,” he said. “These students are best of friends, they’ve bonded socially. We do bassoon shindigs in our backyard or if there’s a chance we’ll go to Hideway and get pizza together.”

The students are at a high, university level of musical virtuosity but it’s not really a competitive atmosphere.

“Thirty percent of the group is new this year,” Ackmann said. “New ones such as first semester freshmen walk in and say, ‘oh, this is what’s expected of me,’ which fascinates me and gives me great joy.”

Sooner Bassooners’ Spring Recital is scheduled for 8 pm March 1 at Catlett Music Center’s Pitman Recital Hall (live stream at ou.edu/fine). The concert is free and open to the public.