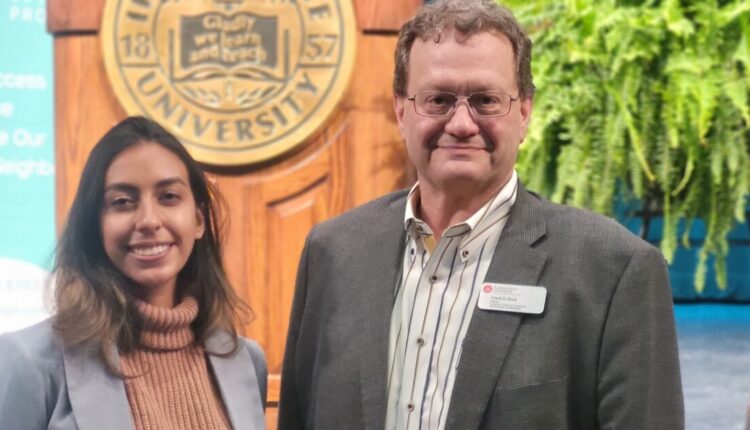 The 11,800 immigrants who call Bloomington-Normal home pay $73 million in taxes and contribute $1.2 billion towards the county’s domestic product, according to data provided Friday to an audience attending The Immigration Project’s fundraising event at Illinois State University.

dr Frank Beck, director of the ISU Stevenson Center for Community and Economic Development, and graduate student Juliana Vidal were keynote speakers for the luncheon.

Immigrants make up 6.9% of the Twin City population; 5,000 of those residents are naturalized citizens, said Beck. The fact that 87.4% of immigrants are long-term residents shows their commitment to the area, according to the speakers.

People who have come to McLean County own 10.2% of all homes, with a combined property value of $645 million.

Vidal, the daughter of Colombian immigrants who settled in Peoria, noted that 7.8% of the county’s labor force are immigrants. The diverse population speaks 38 different languages.

After the presentation, Beck said he was surprised by some of the data generated by the study.

“To see that the contribution is $1.2 billion in our domestic product was significant,” said Beck. Cultural factors may help explain that figure. “We know these folks on the lower end of income tend to spend more money where they live,” said the researcher.

The full report on the economic, social and demographic impact immigrants have on the McLean County economy is expected in about two weeks. The research project was requested by BN Welcoming, a coalition of The Immigration Project, Not in Our Town, West Bloomington Revitalization Project and local faith communities.

Charlotte Alvarez, executive director of The Immigration Project, shared stories of the struggles many people face during their journey across the border.

“The violence is intense” in some cases, said Alvarez. One man lost hearing in one ear and a woman told immigration lawyers of her abuse. “After that happened, lost the baby,” the woman reported to a lawyer.

The process is long to obtain a visa, said Alvarez. Cases that once took six years now take 15 years to complete. During that time, immigrants become invested in their communities and often serve as mentors for others.

Poor housing conditions and lack of employment are among the challenges.

“We can’t do everything, but we can help with a piece of it,” said Alvarez.

The legal assistance team was waiting Friday for information from Gov. JB Pritzker on which Illinois cities would be asked to help with an overflow population of immigrants sent to Illinois by the governor of Texas. Lawyers and staff are willing to help, she said.

About one-third of the clients who receive legal assistance are children. The Illinois Immigration Project opened in 1995 and has offices in Normal and Champaign.