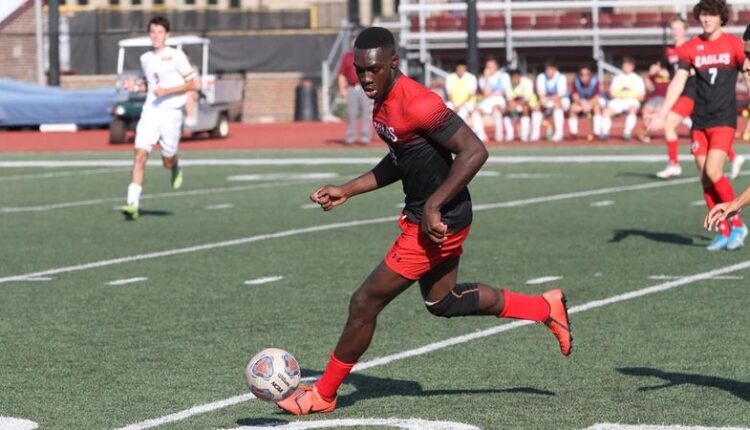 VERONA, Wis. – The Edgewood College men’s soccer team only took one shot on goal and it was the winning goal on Saturday at Edgewood College Field at Reddan Park. The Eagles defeated Concordia Chicago 1-0 in their first victory of the season and displayed an offensive punch that has been lacking in the beginning of the season. Elliah Tameklo scored the game’s only goal as the Eagles improved to 1-1-0 in conference play.

HOW IT HAPPENED
– Just as it was looking like Edgewood College (1-4-1, 1-1-0 NACC) would settle for their second tie of the season, Elliah Tameklo scored on a perfect pass from Austin Hauser in the 76th minute. Hauser played a free kick from midfield into the box and perfectly to Tameklo, who headed the ball into the upper right corner of the goal for the 1-0 lead.

🦅 EAGLES TAKE DOWN THE COUGARS!!

– Jack Gentner recorded nine saves, including a huge save to ensure the victory in the 82nd minute.

– Connor Thompson and Drew Jarstad had good offensive opportunities, both with two shots on the day. Kennedy Wallace, Brad Diaz, Will Thesing, and Thomas Dews all had one shot in the victory.

BEYOND THE BOX SCORE
– Tameklo’s perfect header was his first collegiate goal.

– The last time the men’s soccer program won in shutout fashion was back on September 28, 2019 in a 2-0 victory over Illinois Tech. The Eagles 2019 win over IIT is also the most recent NACC win.

UP NEXT
– Edgewood College will continue with conference play on Wednesday at Rockford University. Action is set for 7:00 pm from Rockford, Ill.