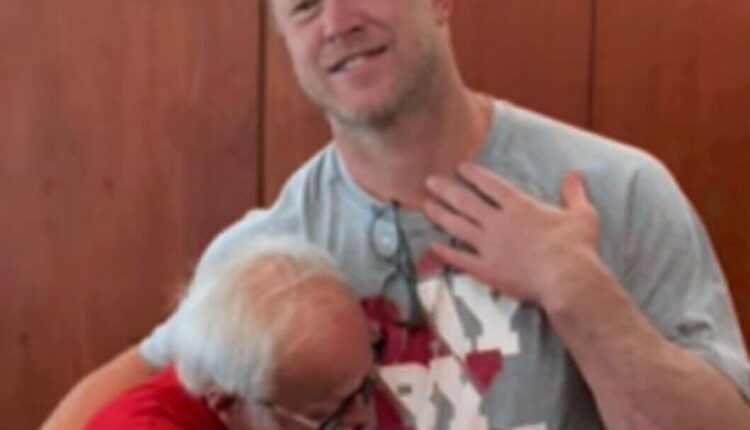 Those who played with him and other Wood River residents feel a strong bond with Frost, and refer to him simply as Scott.

“It’s a tough deal. I feel really bad for him and his family,” said Eric Nielsen, who played left guard on the Eagle team Frost quarterbacked. “A few years ago when he was hired, I was pretty sure things were going to work out. I thought Scott would wind up retiring from this job.”

“Mostly what I feel bad about is it just didn’t work at Nebraska. I know he poured his heart and soul into the program,” said another former teammate, Matt Gideon.

Frost “sort of gave a lot up at that time of his career to come here and to try to make this work. And there’s no doubt in my mind that he did everything he could. Unfortunately it didn’t fit. I don’t know why. That’s probably the thing that hurts the most for me,” said Gideon, one of Frost’s wide receivers at Wood River.

“From the outside looking in, I just can’t figure out why it wasn’t a fit and why we couldn’t turn things around and win six ballgames a year, or eight,” Gideon said. “That’ll just be something I’ll always scratch my head about. It is what it is. Scott’ll always be a Husker, and I appreciate him for who he is.”

Jim Skeen shot video of every game Frost played at Wood River, and every game his late father, Larry, coached in Skeen’s hometown.

When Frost was fired on Sunday, Skeen was stunned.

He thought Nebraska officials would wait until after the Oklahoma game, if not later.

Pulling the plug that quickly “kind of caught me off guard. But I still have faith in him wherever he goes,” Skeen said.

Like others in Wood River, Skeen thinks highly of Frost. “He’s a winner. I’ll back him wherever he has to go.”

Skeen and the Frost family go way back. Shooting Wood River football games, Skeen shared the press box with Frost’s mother, Carol. An assistant football coach, Carol was one of the people calling the plays.

In 2019, when the Frosts were welcomed home at a gathering at Babel’s Barn, Skeen gave Scott a hard drive containing video of all of his high school games.

At that gathering, some of Frost’s old teammates helped him remember the words to the Wood River school song. Frost said that even though he was the Husker head football coach, “when I come back here I feel like I’m just Scott, and that feels good.”

When the Frosts were in Wood River, they were “awesome,” Skeen said.

Last month, Nielsen, Skeen and two others made a trip to Lincoln.

Frost liked the idea. “He wanted to know if I could bring Jim along, because he wanted to let Jim get a tour of Husker Vision, and come to a practice and so forth,” Nielsen said.

Nielsen and Skeen enjoyed a 10-minute chat with Frost in his office. Frost told Skeen he was glad he made the trip. “We’ll always be friends,” Frost told him.

Nielsen took a picture of Skeen hugging Frost, which he later put on Facebook. In that picture, both men look emotional.

“Scott is fiercely loyal to his family and friends,” Nielsen said.

Frost’s mother was also around that day. “I don’t think she misses a practice,” Skeen said.

As a student at Wood River, the future head coach liked to call people by their nicknames. Nielsen was Plug. Skeen was Killer. Mark Codner was Cooter.

“We called him Frosty,” Skeen said.

Skeen would have liked to have seen another step taken before Frost was let go — maybe another dismissal of an assistant coach, or a directive to an assistant to step up his game.

“I thought they could do it differently. But too many people didn’t want him,” Skeen said, adding that it was none of his business.

Playing next to Nielsen, at left tackle, was Steve Spiehs.

“The bottom line is I think he’ll land on his feet, wherever he goes. We just feel really bad that this happened to him in this way,” said Spiehs, now a teacher and assistant girls basketball coach at Grand Island Northwest High School.

Spiehs and his friends wanted to see what Frost “could have done with this entire season,” rather than just three games. He didn’t make it through five seasons, Spiehs noted.

“We all would have liked to see him have a chance at a full season, with all the changes. I think the offense looked great.” Spiehs was “disappointed obviously in our run defense probably more than anything. But those are things I know that he and (defensive coordinator Erik) Chinander could have gotten shored up with a little time. It’s just unfortunate that he wasn’t given that time.”

“I don’t know what to think of the whole deal. It is what it is, I guess,” said Mark Codner, who was a tight end on the Wood River team. “I think the boosters overreact on a few things.”

If Codner were a head coach, “Why would I want to be at Nebraska? They get rid of you in three or four years, no matter how you do,” he said.

The head coach might not have been the problem, Codner said. It might have been worthwhile looking at the defense a little more, he said.

Here is every Husker game coached by Scott Frost.

Nielsen is confident that Frost will rebound.

“The thing is with Scott, Scott’s very smart. He’s going to wind up landing on his feet. He’ll be either an offensive coordinator at a major school again or he’ll be a head coach at a lower level for a while. I honestly, truly believe that he’ll wind up as a head coach in Power 5 in the next 10 years,” Nielsen said.

For now, Nielsen wouldn’t be surprised if Frost, his wife and their three kids go on vacation somewhere for a while.

When Frost was an assistant coach at Oregon, as rumors were flying about his future, Nielsen told him “we’re going to support you wherever you go.” That’s when Frost took the head coaching job at Central Florida.

Just as he always has, Nielsen provides protection for his old quarterback.

If they were face-to-face now, Nielsen would say, “Wherever you land, we’re going to still support you.”

On Sunday, Nielsen texted his old teammate to “let him know I was thinking about him.”

Gideon, who farms west of Wood River, had a nice visit with the Husker coach at Larry Frost’s funeral in 2020.

Gideon says Frost has a big heart and remembers where his roots are. “He’s just a good man. He’ll be blessed someday still,” Gideon said.

“The sadness for me that is that it didn’t work,” Gideon said. “I realize this business is about wins and it’s big business, so part of me can see why a change had to be made.”

Spiehs basically communicates with Frost through messages and texts. “And I understand that,” Spiehs said, noting that Frost has been very busy.

“He told me one time to keep sending him texts and messages — that he sees them,” Spiehs said. A few days later, he often receives a thank you from Frost.

Thanks to Frost, Spiehs was able to provide the Grace Foundation with an autographed football at its gala last month.

“Like I said, we’re so proud of him and he’s got a tremendous work ethic,” Spiehs said. “There’s nothing in him that would have not given this his full effort, just like he has the previous seasons, and like I said, wherever he lands now it’ll be exciting to see, and we’ll follow him there.”

Photos: From Wood River to Memorial Stadium to Orlando and back again, Scott Frost’s Husker career


Wood River native Scott Frost originally went to Stanford but transferred to NU for his final two seasons. He led the Huskers to a national championship in 1997.


NU coach Tom Osborne (in glasses), receivers coach Ron Brown and quarterback Scott Frost look to the scoreboard during a timeout during the 1997 game against Missouri.


Scott Frost runs the ball in the first quarter against Texas Tech on Oct. 18, 1997. Frost rushed for 83 yards on 19 carries in the game.


Scott Frost runs against Tennessee in the 1998 Orange Bowl.


Coach Tom Osborne discusses strategy with starting quarterback Scott Frost in the third quarter during the Huskers’ 38-24 win against Central Florida on Oct. 31, 1997.


Nebraska quarterback Scott Frost scrambles for an 18-yard gain against Texas Tech in 1997.


In the wildest finish in Nebraska football history, Nebraska receivers Shevin Wiggins (5) and Matt Davison (3) play ping pong on the final play of regulation in Columbia, Mo., in 1997. Scott Frost’s pass with seven seconds left bounces off Wiggins, and before Missouri’s Harold Piersey (2) can grab the ball, Wiggins kicks it into the air. Davison dove and grabbed the ball just off the turf, which helped NU tie the Tigers and send the game into overtime.


Scott Frost (7) looks downfield as he prepares to unload a first-half pass against Texas A&M in 1997. Frost was 10-of- 11 passing in the half for 176 yards and also rushed for a touchdown.


After transferring from Stanford, Scott Frost helped lead the Huskers to their fifth national championship in 1997.


Nebraska quarterback Scott Frost (front) gets a hug from Matt Davison after Frost’s second touchdown against Colorado in 1997.


Scott Frost uses hand signals to audible a play during the 1997 game against Kansas State.


Scott Frost breaks into the open against Washington in 1997.


Nebraska quarterback Scott Frost breaks free on a first-quarter run against Colorado in 1997. Frost became the 10th player in NCAA history to pass for 1,000 yards and rush for 1,000 yards in the same season.


Quarterback Scott Frost hugs Nebraska coach Tom Osborne during the news conference in 1997 when Osborne announced he was retiring.


Scott Frost and other members of the second-ranked Husker football team were the center of attention during Orange Bowl Media Day in Miami.


Former Nebraska quarterback Scott Frost (7) hands the ball to Ahman Green on a first-quarter running play in the 1998 Orange Bowl.


Scott Frost looks downfield during the 1998 Orange Bowl against Tennessee.


Quarterback Scott Frost did his share of lobbying for the Huskers after they dismantled Tennessee 42-17 in the 1998 Orange Bowl.


Quarterback Scott Frost (with microphone) and his teammates and coaches greet the crowd of fans who gathered at the Devaney Sports Center to welcome the national champion Huskers back to Lincoln after their Orange Bowl victory against Tennessee.


Nebraska head coach Scott Frost walks off the field after the Huskers lost to Georgia Southern on Saturday at Memorial Stadium.


Scott Frost enters a truck to exit Memorial Stadium on Sunday after he was fired as Nebraska’s head football coach.


Nebraska head coach Scott Frost (right) leads the Huskers onto the field to take on Oklahoma on Sept. 18 in Norman, Oklahoma.


Nebraska coach Scott Frost reacts after a fourth-quarter touchdown was called back due to a holding call against the Huskers during a game against Minnesota on Dec. 12, 2020, at Memorial Stadium.


Nebraska coach Scott Frost leads his team onto the field to face Colorado at Memorial Stadium on Saturday.


Scott Frost greets fans on the way into Memorial Stadium on Saturday, Sept. 1, 2018.


Get local news delivered to your inbox!