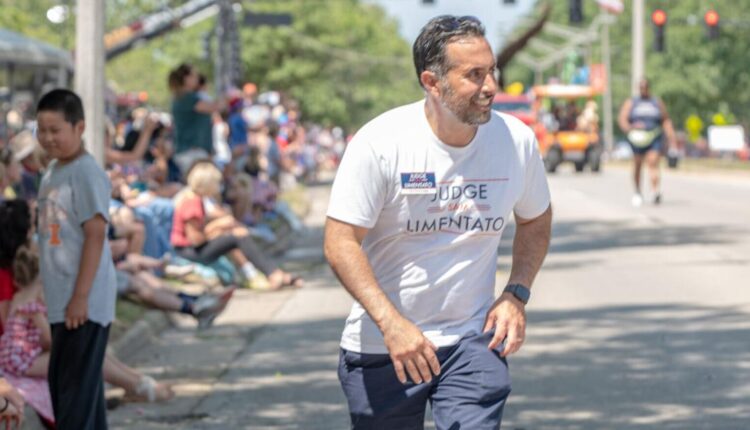 The Champaign County race attracting the greatest sum of campaign contributions this fall is the contest for circuit judge, primarily because of one candidate’s vigorous fundraising.

Republican Sam Limentato, who was appointed to the judiciary in 2020 by former Illinois Supreme Court Justice Rita Garman and her screening panel, has not only loaned his campaign more than $80,000, he has raised more than $57,384 this year in contributions from local Republicans, individual attorneys and law firms, and retired judges.

By contrast, his Democratic opponent, Chad Beckett, has raised about $11,000, primarily through in-kind contributions to himself and from contributions from two individuals, Michael Kricki of Urbana and Mark Krug of Alberton, Mont.

Limentato’s contributors include the Champaign County Republican Party, nearly $6,000; and $1,000 each from John Hecker and Stuart Broeren of Champaign, Kevin Applebee of Mahomet, James Carter of Monticello, ShapeMaster Inc. of Ogden and Jan Miller of Urbana.

Limentato also received $3,000 from the Bloomington law firm Allison Mosby-Scott; $2,500 from the Peoria law firm Goldfine & Bowles; $1,000 each from attorneys Kristen Fischer, Sarah Tinney and the King Law Offices, all of Champaign; and $400 from Champaign attorney Randy Green. He also received $500 from retired Judge Tom Difanis of Mahomet and $250 each from retired Associate Judge Brian McPheters of Champaign and retired Judge Heidi Ladd of rural Homer, whom Limentato replaced on the bench more than two years ago.

It’s not unusual for a circuit judge candidate to loan their campaign large sums of money or raise substantial contributions in a first-time race. After all, once elected, judges almost always serve until they retire or die in office.

Ladd, for example, loaned her campaign $47,000 when she ran in 2004. That was more than the $36,452 she raised in contributions and almost as much as all the money she spent in her successful campaign.

Republicans have spent close to $35,000 in the last four months toward electing Terrence Stuber of Tolono and unseating incumbent Champaign County Clerk Aaron Ammons of Urbana.

Stuber reports $5,240 in contributions from the Champaign County Republican Party; $2,500 from GI Transport Inc. of St. Joseph; the last $2,395 in the Tim Johnson for Parkland campaign fund of the late US Rep. Tim Johnson (who died in May), as well as $1,500 from the federal Middle Ground PAC that Johnson had begun and that is now controlled by former Champaign County Clerk and recorder Mark Shelden; $2,153 from ShapeMaster Inc. of Ogden; and $1,000 each from Michael Baker of Philo, D. Scott Reichard of Urbana and Katherin Schuett of Philo. Stuber also got a $4,000 loan from Michael Dilley of St. Joseph.

Ammons, a Democrat who is seeking a second term, reported contributions of $22,172 in the quarter ending Sept. 30 and has since added $5,000 each from Sen. Dick Durbin’s Prairie PAC and Laborers Local 703 of Urbana. On Friday, he reported a late infusion of $11,300, including $10,000 from the account of Illinois House Speaker Chris Welch, D-Hillside. Ammons’ wife, Carol, is the 103rd House District representative and a member of the House Democratic caucus.

More modest spending was reported in the race for sheriff, where incumbent Democrat Dustin Heuerman is being challenged by Savoy Village President John Brown.

Brown has collected about $34,000 in contributions this year, including $12,955 in the last quarter. Major donors include the Champaign County Republican Party, $5,240; retired University of Illinois police officer Stephen Mechling, $1,000; Larry Skinner of Newman, $510; and $500 each from county board member Stan Harper of Ogden, the Bank of Rantoul, ShapeMaster Inc. and John Reed of Champaign. Brown’s wife, Sara, has contributed $2,500.

Heuerman has reported about $7,234 in campaign contributions this year plus more than $7,000 in in-kind contributions, including $5,560 from himself to pay for billboards. Major donors, each contributing $500, include retired Judge Tom Difanis, AFSCME Illinois Council 31 and Michael Schlosser of Rantoul, director of the UI Police Training Institute.

Contributions to the candidates in the race for county executives seem to match the likelihood of the office being headed for extinction after this four-year term.

Democrat Steve Summers has reported about $16,000 in campaign contributions — most of it coming in two separate $5,000 donations made in the last three weeks from Laborers Local 703 of Urbana and the Southern Central Illinois Laborers Political League of Marion. He also received $1,000 from Pedro Heller of Philo, $750 from the East Central Illinois Building & Construction Trades Council and $250 from Jonathan Ebel of Urbana, a UI religion professor and onetime Democratic candidate for Congress.

Summers’ Republican opponent, Ted Myhre of Sadorus, had still not filed a state-required report on campaign contributions and expenditures as of late Friday. It was due Oct. 16

“We are late filing,” he admitted the middle of last week. “It’s all on me. We’ll probably be found. It was an oversight.”

Peoria director focusing on representation with ‘In the Heights’ production

Open Enrollment for Marketplace Health Plans Is Soon. Here’s What You Need to Know.