Top performers for around Rockford for Week 9 2022 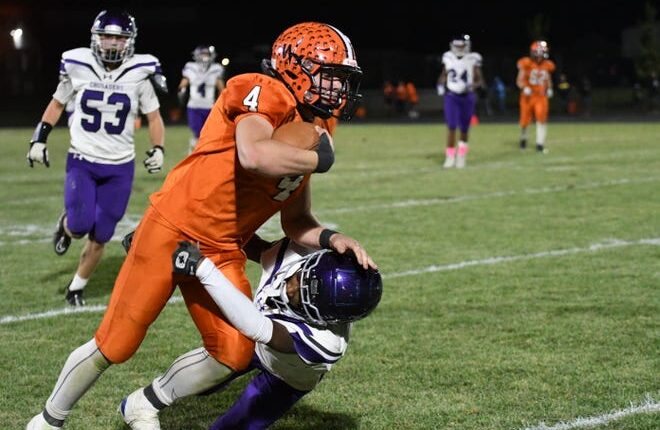 Each week, the Rockford Register Star takes a look at the top-performing teams and players from Friday night games across the Rockford area.

Here are our top performers from Week 9:

Johnson caught one pass for a 64-yard touchdown and led Boylan on defense as the Titans (8-1) beat Freeport 41-20 to win the NIC-10 title outright. Johnson had seven, seven solo tackles, five assisted tackles, three tackles for loss and an interception.

Dennis completed 6 of 9 passes for 194 yards with three touchdowns and an interception in Boylan’s 41-20 win over Freeport.

The North Boone quarterback completed 16 of his 21 passes for 272 yards and six touchdowns during North Boone’s 46-20 win over Oregon. He also rushed for 112 yards and a score on 15 carries.

Black stripped the ball away, creating a fumble and returned it 41 yards for a touchdown on the game-opening drive to put Guilford ahead to stay in a 14-7 victory over NIC-10 co-leader Belvidere North.

Woods played a stand-out defensive game all night and had a game-ending sack when Belvidere North was on the 9-yard line after a hook-and-ladder play in Guilford’s 14-7 win over North that helped the Vikings finish the regular -season 7-2, tying their best record of the last 40 years.

Bertolino ran for 71 yards on 10 carries, including a 42-yard TD for North’s only score. He also raced 44 yards with a hook-and-ladder on fourth-and-14 to give North a first down at the Guilford 9-yard line with nine seconds left in North’s 14-7 loss to Guilford.

Evans, an outside linebacker for Lutheran, chalked up 12 tackles including two QB hits as he helped lead the Crusaders’ defense in a big 21-7 win over Winnebago. The victory secured win No. 5 for Lutheran.

Verner caught three passes for 94 yards and a touchdown from receiver-turned-backup quarterback Bryce Tessendorf (14-for-28, 132 yards, 2 TDs, 2 interceptions) in Freeport’s 41-20 loss to Boylan.

Gensler ran for 93 yards and touchdowns of 30, 5 and 1 yards in Rochelle’s 41-20 loss to undefeated Richmond-Burton in a showdown for the Interstate 8 Blue Division title.

Three backs rushed for over 100 yards for Stillman Valley, but the Cardinals still suffered their first loss of the season, 32-28 to Genoa-Kingston. Owen Zitkus led the way with 13 carries for 110 yards with 2 TDs; Braden Engel had 105 yards on eight carries, opening the game with a 64-yard touchdown run; and Porter Needs had 105 yards on 11 carries with an early-fourth-quarter touchdown that re-handed Stillman Valley the lead. It didn’t stand.

Oregon’s Noah Reber (17 carries for 114 yards and 2 TDs) and Gabe Eckerd (27 carries for 107 yards with a TD) each eclipsed the century mark rushing, but Oregon could not slow down the North Boone offense during its 46-20 defeat.

More football coverage:What you need to know ahead of the IHSA football playoffs selections for 2022

Cowman plowed forward on 16 carries for 118 yards during Winnebago’s 21-7 loss to Lutheran.

Jenkins and Moore both had nine tackles and three tackles for loss (to account for six of the team’s eight) in Auburn’s 44-12 loss to Hononegah.