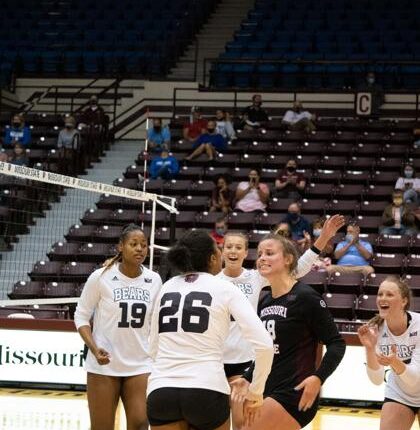 To kick off the Missouri Valley Conference last weekend, the Missouri State Bears volleyball team split their two games against the Illinois State Redbirds and the Bradley University Braves.

Her first contest on Friday night in Normal, Illinois, proved to be competitive and historic to the end. In the first of five sets, MSU had a lead of four points and even led by five points with a score of 18-13. The Redbirds would storm all the way back to level the score at 18, but junior outside hitter Manuela Ibarguen helped the Bears take over the set when she scored three kills on the track.

The second movement was even tighter than the first. The MSU’s biggest deficit was only one, but Illinois State won the set after taking control when the teams were tied by 22 points on a crucial fifth set. After nearly five draws, the Bears went on a 6-1 run to take a 10-6 lead. ISU’s attempt at a comeback was thwarted by outside hitter Brooklyn Cink (junior), who scored two kills and a block to take the lead 14-11. The ISU would miss their final attempt at attack for the bears to take over the set and the game.

During the win, the experienced outside hitter Amelia Flynn (senior) put down her 44th career double double with 14 kills and 16 digs. This would mark her mark in MSU volleyball as she became one of only seven players in program history to record at least 1,000 kills and 1,000 digs. Flynn would get help from multiple teammates as Ibarguen hit a season high of 17 kills and Maddy Bushnell, the freshman mid-blocker, added eight kills at a hit rate of .462 as she leads the MVC in the category.

“What a great team win! We had a lot of players who contributed in some clutch moments when we needed it,” said head coach Steven McRoberts in an MSU statement. “We really wanted to come here and have that feeling of victory because we know we’ll be back for the conference tournament in two months. Congratulations to Amelia on a tremendous career achievement of 1,000 kills and 1,000 digs.”

The Renaissance Coliseum in Peoria, Illinois was the location of their Saturday night game against Bradley. The highly competitive competition lasted only four sets as the Braves would adapt and return from multiple draws and leadership changes. Morgan Sprague, freshman setter, had an overall hit efficiency of 0.245% with 15 throws and distributed 45 assists. Even nine blocks, a season high of 22 digs from first defensive specialist Kate Owen and a total of 70 from the team weren’t enough to contain the Braves’ 0.312 hit rate. Coach McRoberts paid tribute to the opponents after the loss, saying he believes they can learn and grow from it.

“I will definitely acknowledge Bradley for completing those two sets (first and third) and then checking the fourth set,” said McRoberts. “We can take away a lot of positive experiences from this weekend as we grow this season.”

MSU will continue the conference game next weekend. They are returning home to face the University of Northern Iowa and Drake on October 8th and 9th.