Volleyball Returns to Win Column with Sweep of Northwestern 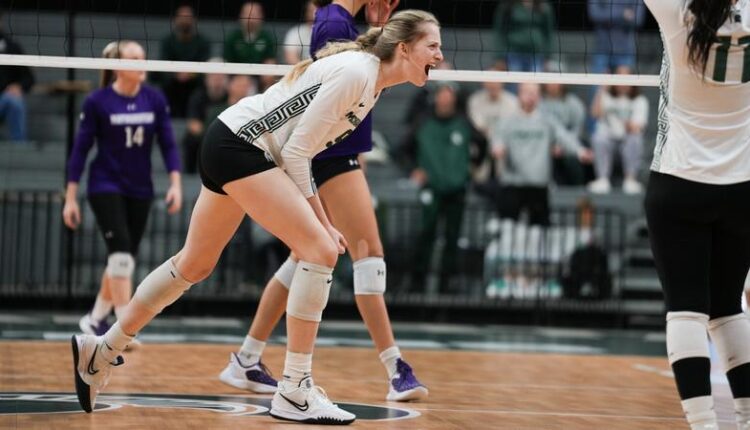 EAST LANSING, Mich. – Michigan State volleyball broke back into the win column on Saturday night in the Breslin Center, defeating Northwestern, who is receiving votes in the latest American Volleyball Coaches Association poll, by a final score of 3-0 (25-23, 25-16, 25-14). Senior middle blocker Emma Monks had a career night with a career-best 11 kills.

“I’m proud of the team,” Michigan State head volleyball coach Leah Johnson said. “This morning we talked about how we’ve been giving teams points instead of being greedy with our points and I saw the team convert on that today and play with a lot of confidence. Northwestern is in a tough situation without their setter, and they ‘re a great team, but we can’t control their circumstances, we have to control ours.”

The Spartans out-hit Northwestern, .252 to .067, holding the Wildcats to -.050 hitting in set two. Northwestern was hitting well over .500 early in set one before Michigan State adjusted after a series of timeouts. MSU out-blocked Northwestern 8-5 and had five service aces to the Wildcats’ four.

“I thought our serving game was really good across the board, and once our pins started managing their errors we got better and better the whole match,” Johnson said.

Sophomore Aliyah Moore matched Monk’s kill mark for the night with 11 to lead the Spartans. Fifth year Rebecka Poljan and freshman Evie Doezema each finished with five kills. Graduate setter Zoe Nunez posted her eighth double-double of the season and her second of the week with 25 assists and 12 digs. Junior Nalani Iosia had 10 digs and six assists for the Spartans. Poljan finished with a match high five blocks.

“I thought Emma did a great job with a career-high 11 kills,” Johnson said. “I thought she was a force at the net blocking. She only had three blocks, but she blocked so many balls back to their side of the net and forced them to take swing after swing.”

Northwestern built a 16-8 lead in set one before the Spartans began to climb back into it. MSU used a 7-1 run to bring the score 17-15 and forced the Wildcats into burning each of their timeouts during the run. Michigan State continued to chip away at the Northwestern lead before using a late 4-0 to take a 24-22 lead and eventually find set point on a Wildcat ball handling error.

Michigan State took the lead in set three at 4-3 and never looked back. Northwestern brought the set back within a two-point deficit at 12-10, but the Spartans would go on a 13-4 run to close things out and complete the sweep. Monks had six of her 11 kills in set three as Michigan State hit a match-best .452 in the final set.

Temi Thomas-Ailara led the Wildcats with nine kills but was held to just .036 hitting by the Spartans. Grace Reininga had 18 assists and Ellee Stinson had a match-high 18 digs. Leilana Dodson had five blocks for Northwestern.

up next: Michigan State hits the road for its final road trip of the season next weekend, seeking rematches against Illinois and Northwestern. The Spartans first travel to Champaign, Illinois to meet the Illini at 8:00 pm ET on Friday, Nov. 18. After a travel day on Saturday, Michigan State is set to play Northwestern at 2:00 pm ET on Sunday, Nov. 20