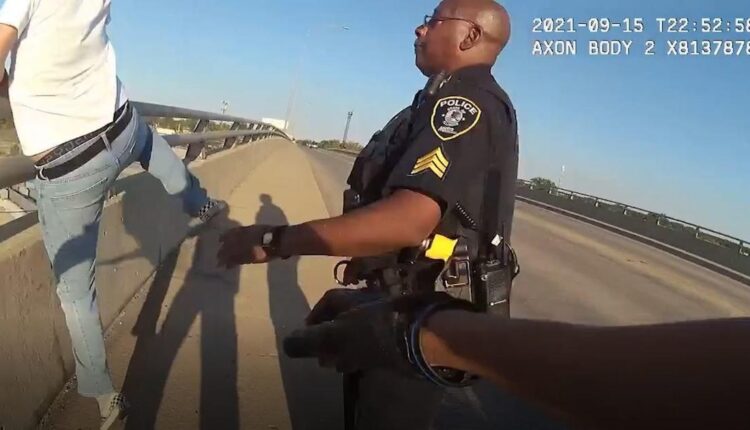 The workers said the driver then got out of his vehicle and walked onto the 127th Street bridge.

Two Metra officers, Sgt. Will Wright and Officer Andrea Clunie, approached the man standing on a bridge near the railing. Both the road and the bridge were closed at the time due to the rebuilding of a road crossing.

Police said when they met him the man cried and said he was sorry.

The officers told him to turn around and put his hands behind his back for his arrest, but then the man suddenly jumped over the railing to jump off the bridge, Metra said.

While the officers were working to grab the man and withdraw, Clunie can be heard on the video: “No, no, don’t do that.”

When they pulled the man back onto the bridge, he said to the officers, “I’m just tired. I’m just so tired.”

Clunie replied, “And we will help you. … Nothing is worth killing yourself, okay?”

The man was arrested and taken to Ingalls Hospital for an examination, police said.

September is National Suicide Prevention Month and anyone in or knowing someone in crisis is urged to call the 24/7 Suicide Prevention Lifeline at 1-800-273-TALK (8255). Help is also available online at suizidpräventionlifeline.org.