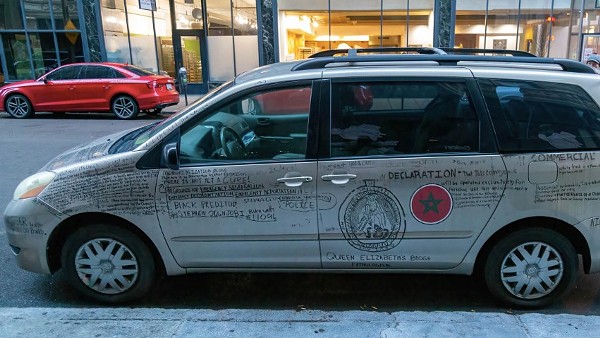 A photo of the gold van from last year, used with permission of the photographer.

A 54-year-old St. Louis woman who allegedly exchanged gunfire with police Friday was released from jail without charges being filed against her, KSDK reported yesterday.

The woman was arrested Friday following an incident outside the Social Security Building in the city’s Downtown West neighborhood.

Police said that she was in a gold minivan with extensive writing on its doors, hood and trunk. The van is a familiar sight to some in the area, and much of the writing on it has to do with the Sovereign Citizen movement, an organization the Southern Poverty Law Center says has an extensive history of conflict with the federal government.

According to the Anti-Defamation League, “Sovereign citizens believe that a conspiracy subverted and replaced the original US government with an illegitimate ‘de facto’ government, but that people can take steps to divorce themselves from the illegitimate government, after which its laws, taxes, regulations and courts have no more authority over them.”

Police said that when they responded to the van on Friday, the woman inside it told officers she was going to shoot up the Social Security Administration building, The building on 16th Street, one block from City Museum, holds many federal workers.

When an officer tried to get her to exit the vehicle, she opened fire. Officers fired back.

No one was injured in the exchange of gunfire. Afterwards, the woman threw her gun out of the window and surrendered to the police.

According to KSDK, after spending the night in the city jail, the woman was released on Saturday afternoon.

The Office of the Circuit Attorney told the station that more police work is needed in the case. A spokesperson for the office said, “The case is under investigation and we can’t comment further.”

We welcome tips and feedback. Email the author at [email protected]
or follow on Twitter at @RyanWKrull.