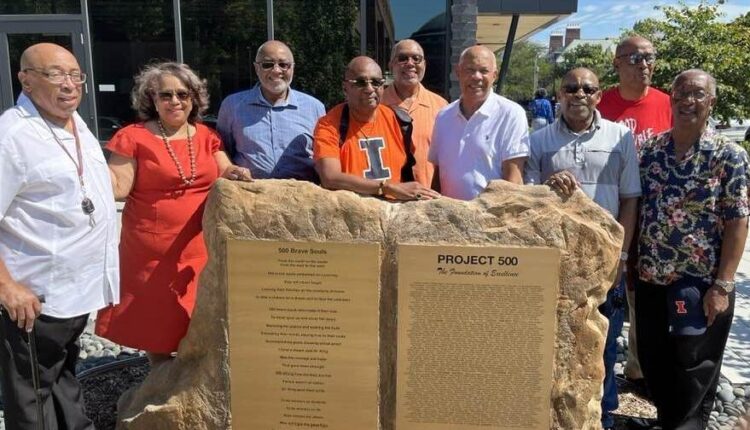 URBANA — When Malcolm Rockhold arrived to study at the University of Illinois in the fall of 1969, scores of Black sophomores welcomed him to campus with open arms.

His mentors were products of the Special Educational Opportunities Program, known as “Project 500.” In the wake of the Rev. Martin Luther King Jr.’s assassination, the UI admitted nearly 600 African American and Hispanic freshmen in 1968, almost tripling the number of minority students on campus.

“They showed us how to survive on campus,” Rockhold said Tuesday.

Now, five decades later, those Project 500 alums have been immortalized. On a boulder next to the Bruce D. Nesbitt African American Cultural Center, the names of 565 classmates are emblazoned on a golden plaque, next to a poem penned by Rockhold: “500 Brave Souls.”

“Talking to Black alumni, everybody’s got a story of being an African American student on that campus, about their struggles or how they made their families proud,” Rockhold said. “That monument is going to link future generations to the legacy of Project 500.”

The monument was financed through the fundraising of Project 500 alums, who continued to meet virtually after the 50th anniversary of their arrival to the UI, and first installed in November.

During a weekend reunion of Black alumni, Project 500 classmates got to witness an unveiling of the memorial, where Rockhold read aloud his tribute to them.

“It touched everyone in the group when he read it to us,” said Leroy McCray, a Project 500 alum who led the commemorative efforts. “We never thought of ourselves as brave souls. Just some kids trying to get an education.”

Their early days on campus were not easy. On Sept. 10, 1968, hundreds of Project 500 students gathered in the Illini Union for a sit-in demonstration, mainly over substandard housing conditions.

According to historical accounts, 240 Black students were arrested by police in the middle of the night after some protesters damaged Union furniture. Many students, including McCray, were detained in Memorial Stadium’s West Great Hall.

“That was our first introduction to campus, after being there for a week,” McCray recalled.

Said Rockhold: “After they had gone through the turmoil prior to me coming down there, I was warmly received by the students that paved the way.”

Today, McCray is a retired product designer based in Chicago. Many members of the Project 500 cohort were from all over the country; McCray came to campus from Philadelphia in the fall of ’68.

Some of his favorite memories were spending Thanksgivings and school breaks with local families and other students who couldn’t afford to make a trip home.

“It chokes me up thinking about that era of unity,” McCray said. “There were recruits from everywhere — we still keep in touch 50 years later.”

What the alums hope is that the boulder bridges future generations of minority students to their story and sacrifice.

“All we’re doing is passing the torch, and waiting for them to pick it up and become the next 500 brave souls,” McCray said.

Inspired by the response to his poem, Rockhold wrote an addendum addressed to incoming freshmen:

“Meet me at the rock if you are lost.

“Meet me at the rock when all hope is gone.

“Review the names of your brothers and sisters,

“500 souls that made a commitment,

“To pass the baton of academic achievement,

“To the next generation of Black scholars and dreamers.”

Expanding hospital-based innovation hubs to promote ‘what if’ solutions

Buy and Bust: After Platinum Health Took Control of Noble Sites, All Hospital Workers Were Fired