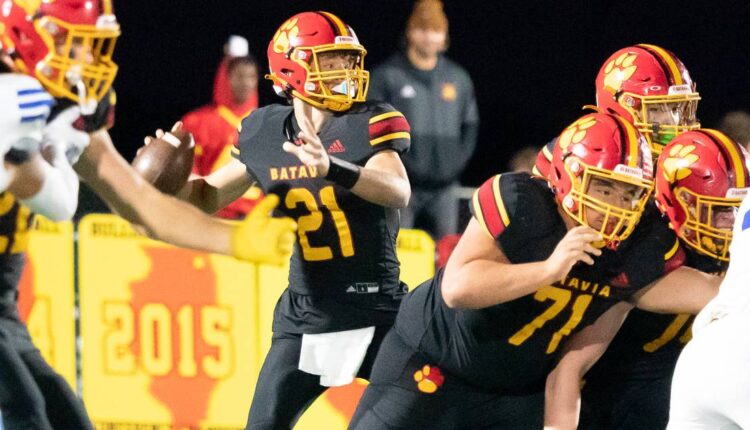 ROCKFORD – Batavia had no choice but to turn the page.

Just a week removed from a double overtime heartbreaker to lose a share of the DuKane Conference title to St. Charles North, the Bulldogs simply had their second season so-to-speak to prepare for.

From opening whistle, visiting Batavia erased those memories in a dominating 42-0 win over Rockford Guilford in Friday’s Class 7A first-round game.

“It was amazing work by everybody [in preparation for the playoffs],” Batavia quarterback Ryan Boe said. “…It was just move on [from last week]. It’s playoff time. We don’t have to worry about anything behind us. It’s just learn from our mistakes and let’s go.”

The Bulldogs (7-3) scored all 42 points in the first half to prompt a running clock for the remainder of the game. Rockford Guilford (7-3) was playing in its first playoff game since 2013.

“What we were excited about what we were in the playoffs. We know the quality of our opponents; we know where we stand,” Batavia coach Dennis Piron said. “And we don’t have a choice where we had a couple games [in the regular season] we wish we could’ve had back. They were great football games. There’s no shame in losing a hard-fought game to somebody else.”

Batavia is likely going to host No. 2 seed Hersey in Batavia next Saturday.

In the first quarter, Batavia and Guilford traded turnovers, as Bulldogs linebacker Joey Barbush intercepted Vikings quarterback Jaylen Poole on their first possession, but Batavia gave the ball back on a Charlie Whelpley fumble.

After that, Batavia was back in business.

Boe (9 of 11, 121 passing yards, two passing touchdowns) later found Drew Gerke for a 47-yard touchdown with 8:37 to go until the half for the 28-0 advantage. Ryan Whitwell (63 rush yards) then scored two touchdowns for the 42-0 lead going into the half.

The Bulldogs starting defense stifled the Vikings’ starting offense. Running back Jayvon Jones had 27 rushing yards, while Poole finished 8-of-19 for 40 passing yards against the starters in the first half.

Batavia’s reserves played the second half.

“What I did appreciate about my team all year is: Just like tonight, they play with incredible class at all times under all circumstances,” Piron said. “We didn’t get [many] personal fouls this year. I had officials talk about how our guys were just quiet and played. We celebrated with ourselves and our own sideline. We didn’t say things in games. That’s really what I’m proud of about these guys.

The Vikings, meanwhile, have a foundation to build off of moving forward.

“They had a good week of practice, man. They weren’t scared of nothing,” Vikings coach Anthony Capriotti said. “This whole year, we’ve learned lessons. First, we had to learn to win in the NIC-10. They had to learn how to win tight games. We’ve checked all that off.”

“I’m really excited to see, now that we know there’s football [to be played] outside the NIC-10, where we take it now,” Capriotti continued. “Not just as a football team, but as a program. [Batavia] dressed 107 guys and had two coach buses that we don’t do right now, but those are things, now we see it and they [can] strive.”

Despite the lopsided loss, Capriotti believes “you never grow until something like this happens.”

“That’s the big thing,” Capriotti continued. “So, we were exposed to it now and we’re going to learn from it and get better from it as an organization perspective. I’m really excited to see what our next tier is.”