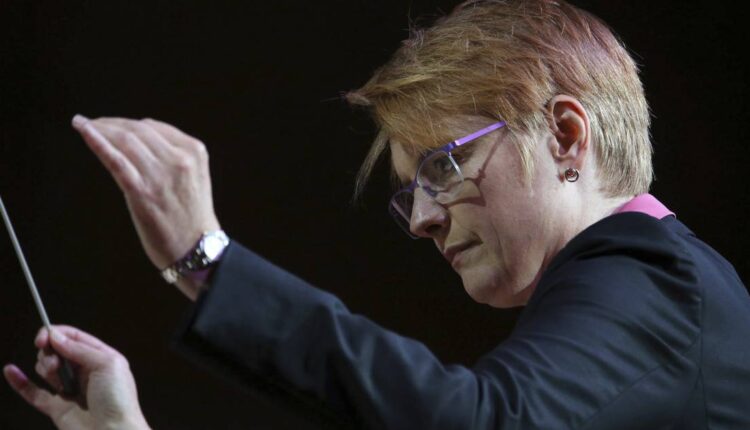 The celebration of 50 years of the La Porte County Symphony Orchestra continues with the beginning of its 2022-23 subscription series.

She noted that it was Tim King, La Porte County Symphony Orchestra’s executive director, who suggested Davis for the concert.

“He comes highly recommended so that is super exciting,” said Watson about the third vocalist whom she collaborates with for the first time on Americana!

The vocalists perform some of the greatest hits from George Gershwin’s “Porgy and Bess” and Leonard Bernstein’s “West Side Story.”

“I think the audience is going to love them,” said Watson, who conducts Americana!

“I’ve not done anything from ‘Porgy and Bess’ before so I’m super excited to do that for the first time. I think ‘West Side Story’ is one of the most phenomenal scores out there. It’s pure genius. With the (remade) film, that seemed topical.”

“The Copland ‘Fanfare’ is an iconic work of the canon as it were. I’ve prepared it with the Tower ‘Fanfare for the Unommon Woman,’ which is her witty, quirky reply to that,” said Watson, who splits her time between Champaign, Illinois, and Kansas City, Missouri.

“I’m excited to introduce the audience to Joan Tower’s ‘Fanfare’ because I don’t know that the orchestra has done that before.

“We’ve just done three education concerts for 6,000 students. We ended those with the ‘Hoe-Down’ from Copland’s ‘Rodeo.’ I know the orchestra and the audience is going to go crazy for those.”

“It seemed to be a great opportunity to do some things that the orchestra has done in the past,” Watson said.

“That’s a part of La Porte County Symphony Orchestra trying to increase our footprint in terms of our educational offerings and connecting with music students,” said Watson, who started as a University of Illinois faculty member in Urbana in mid-August as director of orchestras .

“The Instrument Petting Zoo is an opportunity for students to get to know individual members of the orchestra and get a quite literal hands-on experience of what it looks like and sounds like to play and experience all of the instruments that we have.”

This season she and longtime associate conductor Charles Steck are working alongside new assistant conductor Frances Ho, a doctoral student of Watson’s at the University of Illinois at Urbana-Champaign.

“Each (season) we will have a highly qualified and experienced conductor who is engaged in conductorial study at the University of Illinois who can serve in this role with La Porte County Symphony Orchestra,” Watson said.

“They get some professional experience and La Porte County Symphony Orchestra gets to work with different conductors.”

“I love working with this group, the growth and the commitment on the part of the players. It blows me away what’s possible and similarly the level of community support. It’s a very special organization,” said Watson, who is also principal guest conductor of Kansas City Chamber Orchestra.

“The programming is hopefully going to bring back some fond memories along with creating some new ones.”

Jessi Virtusio is a freelance reporter for the Post-Tribune.