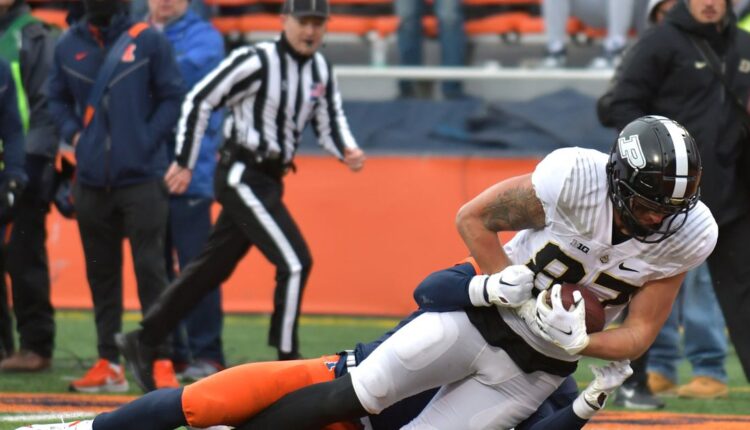 Week 11 resulted in another action-packed Saturday in the Big Ten.

For Maryland, Saturday was a nightmare. The Terps went to State College, Pennsylvania, and were destroyed by Penn State, 30-0.

All 14 Big Ten teams were on the gridiron Saturday, all in conference play. Let’s dive right into the action.

Upset game: Purdue at No. 21 Illinois

Coming off a miserable 24-3 loss to Iowa last week, Purdue had a golden opportunity to rebound Saturday. The Big Ten West title was — and still is — up in the air heading into week 11, and the matchup between the Boilermakers and the Fighting Illini would have major implications.

Purdue walked into Champaign, Illinois, as six-point underdogs against the No. 21 Fighting Illini, and it struggled out of the gates.

Illinois junior running back Chase Brown, one of the best backs in all of America, made his impact felt early. About halfway through the first quarter, Brown hammered it in from two yards out to give Illinois a 7-0 lead.

After letting a couple of opportunities slip with a 44-yard field goal and an interception, Purdue still found itself in a position to even the game with just under nine minutes to play in the second quarter. Purdue redshirt freshman running back Devin Mockobee pounded in a 6-yard touchdown of his own, evening the score at seven apiece.

Brown scored his second touchdown on the possession after — an 8-yarder — but Purdue’s stars responded. Sixth-year quarterback Aidan O’Connell found sixth-year wideout Charlie Jones for 32 yards to tie the game at 14 before halftime.

Illinois had an answer this time, as senior quarterback Tommy DeVito linked with junior wide receiver Brian Hightower for a 6-yard touchdown to even the back-and-forth battle at 21 toward the end of the third quarter.

Purdue jumped ahead earlier in the fourth as O’Connell and Durham hooked up for a touchdown again — this one for 12 yards. Purdue would not relinquish its lead from there, coming up with an interception and holding on for the 31-24 upset.

Purdue and Illinois are now in a four-way tie along with Iowa and Minnesota for first place in the wacky Big Ten West.

The annual matchup between the Terps and the Nittany Lions isn’t a true rivalry, and Saturday only further proved that.

Penn State and Maryland battled for the same recruits — Penn State even poached former Maryland blue-chip linebacker Chop Robinson this past season — and for annual relevance in the Big Ten, yet the Nittany Lions have historically dominated the Terps.

That didn’t change Saturday. The Nittany Lions flat-out whooped the Terps, 30-0, and improved to 42-3-1 against Maryland all-time. Saturday’s game started and ended bleak, as Maryland could not pattern any sort of legitimate offensive yardage all game.

Maryland knew the run was coming, but it couldn’t do anything to stop it as Penn State raced out to a 21-0 lead.

Redshirt senior kicker Jake Pinegar drilled three field goals, and Penn State didn’t even need to score in the fourth quarter to close out a dominant — and embarrassing for Maryland — 30-point shutout win.

With the line at a “pick’em” between the Badgers and the Hawkeyes, Saturday’s Big Ten West showdown was anyone’s game.

While the result of Iowa’s 24-10 win may not necessarily be a surprise, anytime Iowa scores three touchdowns it is eye-opening. The Hawkeyes’ offense has been obliterated on a national landscape for its offensive ineptitude, though the unit has been trending in the right direction the last few weeks.

Wisconsin got on the board first Saturday afternoon, taking a 3-0 lead into the second quarter.

The teams traded punts, but the fourth of the sequence was blocked by Iowa sophomore defensive lineman Deontae Craig. Craig’s block gave Iowa field position inside the red zone, and freshman running back Kaleb Johnson pounded it in from four yards out to give Iowa a 7-3 second-quarter lead.

Iowa’s defense came through for its second score, as sophomore defensive back Cooper DeJean’s 32-yard pick-six gave Iowa the 14-3 advantage with fewer than two minutes until halftime. Wisconsin’s offense quickly responded with a big play, though. Junior quarterback Graham Mertz hit sophomore wide receiver Keontez Lewis for a 51-yard score with 52 seconds to play in the half, cutting the deficit to 14-10.

It was Iowa’s defense that stepped up again in the second half, not allowing a single point in the final 30 minutes.

The score remained 14-10 until the fourth quarterback, and senior quarterback Spencer Petras’ 1-yard touchdown rush was the icing on the cake.

All of the sudden, Iowa is now deadlocked in a Big Ten West fight for a spot in the conference’s championship game.