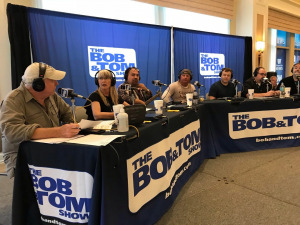 A 40th anniversary for “The Bob & Tom Show” is likely to come after the announcement of a contract renewal for the radio show with 18 stations owned by Cumulus Media.

The comedy-oriented morning show, which featured more than 100 stations in total, debuted on March 7, 1983 on its flagship station in Indianapolis, WFBQ-FM 94.7.

Although details of the agreement with the Cumulus Media broadcasters were not disclosed, a press release from Dollinger Strategic Communication described the extension as a “long-term deal”. The show would hit the 40-year mark in 2023.

The contract extension announced on Monday applies to six stations that have been broadcasting “Bob & Tom” for at least 20 years: WOFX-FM in Cincinnati; WGLO-FM in Peoria, Illinois; KHKK-FM in Modesto, California; WILZ-FM in Saginaw, Michigan; KKGL-FM in Boise, Idaho; and WQHZ-FM in Erie, Pennsylvania. A new partner station, KXHS-FM in Abilene, Texas, was also announced.

“The Bob & Tom Show,” with host Tom Griswold on left, will air in 2018 in Orlando, Florida. (Courtesy photo of Dollinger Strategic Communication)

Indianapolis listeners will continue to find Bob & Tom on WFBQ, a show-and-broadcaster alliance that has continued since Bob & Tom syndicated Premiere Networks to Westwood One (then known as Cumulus Media Networks) in 2014 changed.

WFBQ, part of the iHeartRadio network, was ranked 8th most popular station in central Indiana in September according to the Nielsen ranking for listeners of all ages. Fellow Classic Rock broadcaster WJJK in 1st place.

“Bob & Tom” host Tom Griswold has been on the show since it started in 1983. Co-host Bob Kevoian retired in 2015 shortly after he and Griswold were inducted into the National Radio Hall of Fame. Griswold, 68, missed some work this summer while recovering from heart valve replacement surgery.