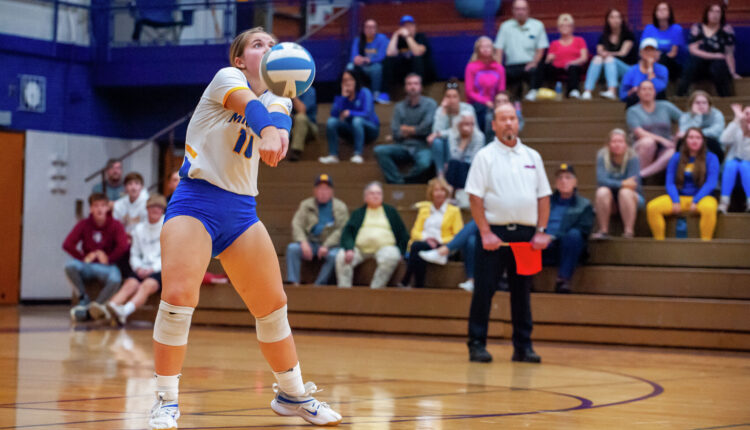 The ninth-ranked Rams had little trouble with the Chemics on Tuesday, dominating much of the first two sets and going on to win 25-6, 25-11, 25-17 in a Division 1 regional semifinal at Bay City Central.

“Rockford blocked amazingly. They really blocked. They weren’t taller than us, but they got up, and they blocked,” said Midland coach MaryAnne Wright, whose Chemics end at 21-22-2. “They were tremendous, and my sophomores kind of panicked tonight.”

Despite Tuesday’s tough ending, Stevens was all smiles when reflecting on her team’s recent remarkable turnaround.

“The girls are just so fun to be with, and we bonded so much. We’ve come so far from the beginning of the season to now,” she noted. “It’s just amazing to see the change that everyone has had.”

While Rockford came out aggressively, Midland looked decidedly flat throughout the opening set. The Rams ran off 10 straight points, including four consecutive errors by MHS, to take an early 11-1 lead in the first set and easily cruised from there with little resistance from the chemics.

The second set started similarly, as Rockford ran off 11 consecutive points, including four straight aces by Sienna Wolfe, to open up a 12-1 lead. At that juncture, however, Midland finally began to show some spunk.

Midland played with more effort and more composure for the remainder of the set and made the Rams work harder for their points, but the chemics were unable to get closer than nine down the stretch.

“I told them we had to play with some pride,” Wright said of her between-sets talk. “I think we had a couple of girls come out not ready to play.”

MHS definitely looked ready to play in the third set, going on an early 5-2 run – including an ace by Brigid O’Malley, a kill by Nicole Giardina, and a block by Brooklyn Foster – to take its first lead of the night at 6-4. Rockford answered, however, with a block by Kalynn Manyen and an ace by Frances Young to stem the tide and begin a 7-1 run which gave the Rams an 11-7 edge.

The Chemics scored three of the next four points, including an ace by Olivia McMath and a kill by Grace Schloop, to cut it to 12-10. Midland matched Rockford point-for-point for the next several minutes, but the Rams eventually scored the final five points of the match to pull away.

“I’m pleased with how we ended that third game. At least we were fighting and trying to compete,” Wright said. “ … I would say we beat ourselves in the first game, and then they (Rockford) started serving better in game two and game three. … But I’m proud of the girls and how they fought. We’re going to miss these seniors.”

Asked what she learned about her team during its late-season surge, Stevens replied, “That anything can happen, really. From losing to Lapeer to beating Dow – that was a crazy change. I didn’t think it would happen.

“It’s awesome to see how hard people can work and how that can make a difference,” she added. “ … We bonded more as a team (over the past few weeks). We talked more. We definitely put in more effort.”

Midland, which has been devastated by injuries all season long, was playing without sophomore setter Jenna Rekeweg, who suffered a broken thumb in last Thursday’s district final. Rekeweg was one of seven Chemics who were in street clothes due to injury during Tuesday’s match.

Looking ahead to next season when, presumably, Rekeweg and juniors Morgan Williams, Hayden Purvis, and Ava Keit will all be back from injury, Wright said she is expecting to have a very strong team.