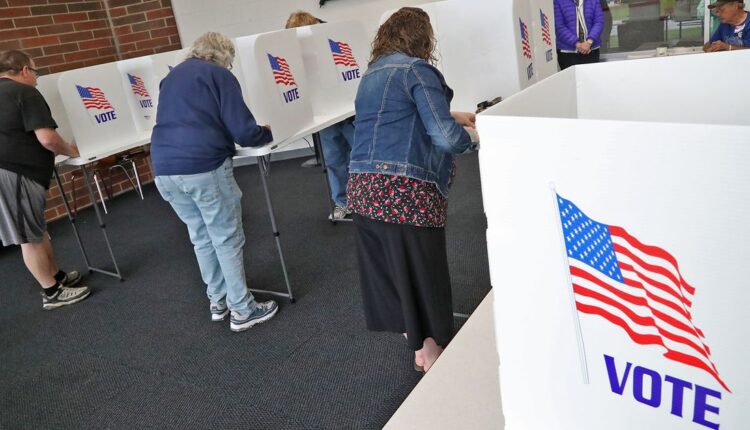 “It’s much more than what I expected,” she said.

Bodey said she expects the many summertime activities that take up the time of local families – county fairs, vacations and more – to impact turnout for the Aug. 2 primary.

Both election board directors also said they’re looking for pollworkers to work on election day.

Baker said he’d be pleased to get roughly 300 workers to help man polling locations. Bodey said roughly 56 workers – half of what other elections require – is what she’s expecting to use this upcoming election.

Preparing for this election was done on a tight timeline: statehouse primaries were originally slated for May with the primary for Ohio governor and US Senate, but the Ohio Redistricting Commission failed to create maps that the Ohio Supreme Court found constitutional.

A federal court in May then ordered the state to have the primary in August using unconstitutional maps while they come up with new maps for 2024.

Champaign County’s map is unaffected by the redistricting, but the Ohio Senate district including Clark County, District 10, now stretches all the way south to Wilmington but no longer includes Madison County. In addition, Clark County is split for its Ohio House of Representative districts: the northern part of the county (including Springfield) is in District 74, while the southern half of the county joins Greene and Clinton counties in the 71st district.

Both election officials said the $20 million allocated by the General Assembly to help them cover the costs of the primary was beneficial.

“Really, it was critical we got it,” Bodey said. Champaign County’s election board had only budgeted for two elections, as the August primary was unexpected.

Baker said that the election board has coordinated countywide special elections for “a fraction” of what it received in its allocation.

Here are the competitive races and issues in the Aug. 2 ballot:

No Democrats filed for this seat.

No issues or questions were filed for the Aug. 2 primary in Champaign County.

No Democrat filed for this seat.

Vote by mail: Applications for absentee ballots to be mailed for Aug. 2 election must be received by noon July 30 at your local board of elections. Though this is the deadline set in law, election officials warn that waiting until this deadline may make it hard to vote by mail because of delivery times.

Years before Shockwave jet truck crash, I rode it at 300 mph