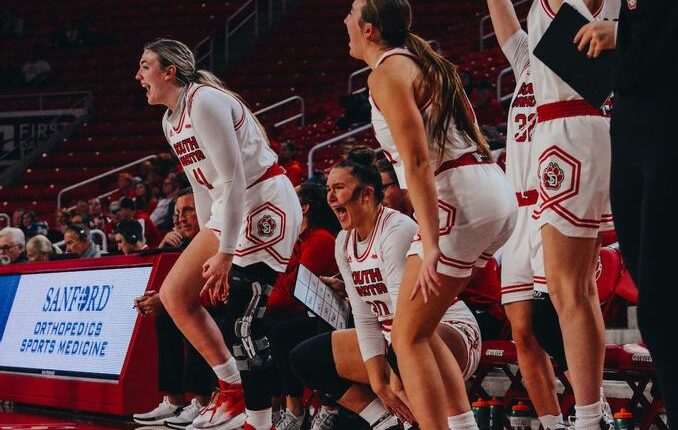 Tonight’s heavyweight matchup inside the Sanford Coyote Sports Center features No. 21 Creighton and a South Dakota squad receiving votes for a national ranking. The Bluejays advanced to the Elite Eight last season. The Coyotes advanced to the Sweet 16. Both are coming off Monday night wins. Creighton outlasted South Dakota State 78-69 at Brookings while South Dakota took care of overmatched Midland 106-41. A free web stream will be available right here on GoYotes.com. Fans can also listen to the game on the Coyote Sports Network with Carter Woodiel, carried on KVTK 106.3 FM in Yankton/Vermillion. The radio broadcast will also be available for free on The Varsity Network app.

All 11 players who dressed for South Dakota played double-digit minutes Monday and Coach Karius has stated that depth will be one of the Coyotes’ strengths this season. Madison Grange, a graduate transfer from Utah Valley, was featured in the Coyotes’ starting lineup. Cal Baptist transfer Nicole Avila-Ambrosi offered 14 points off the bench. Returner Morgan Hansen had 16 points off the bench Monday.

Creighton returns six of its top seven scorers from last season and thus the top-25 ranking. The Bluejays will be the highest ranked team to visit the Sanford Coyote Sports Center and the third top-25 foe overall. The last was Missouri State during the 2019-20 season. The first was Iowa State one season prior. South Dakota split those matchups, topping Iowa State and losing to Missouri State.

In Brookings on Monday, it was junior guard Lauren Jensen who poured in 30 points to lead Creighton to the win against SDSU. She made 10-of-20 from the field and was 4-of-7 from downtown.

The teams have met 10 times at the Division I level. South Dakota has won the last six meetings, all by 10 points or less. Last year against South Dakota, it was Emma Ronsiek who led the Bluejays with 23 points on 9-of-11 shooting. Jensen took just five shots and totaled five points. South Dakota held Creighton to 10 fourth-quarter points and got a game-winning bucket from Hannah Sjerven for a 73-71 win in Omaha.

South Dakota extended its home winning streak to 14 games Monday, the seventh-longest active streak in the country. The Coyotes are No. 23 in the preseason Mid Major Top 25 after finishing on top of the poll last year and with a No. 24 ranking in the final Coaches Poll. South Dakota heads to Peoria, Illinois on Sunday to face Bradley at 2 pm

Progress being made on future home of Champaign County Humane Society