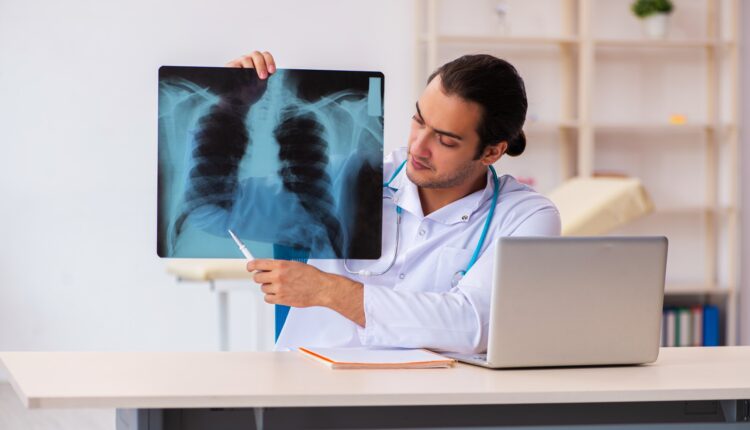 Stock photo of a lung x-ray

The statistics are sobering.

Lung cancer is the second most common type of cancer in the United States. It’s the number one cause of cancer deaths worldwide.

Nishanth Vallumsetla, MD, a pulmonary and critical care physician at OSF HealthCare in Urbana, Illinois, has seen his fair share of lung cancer patients. He says there’s a way to avoid the leading cause of the deadly disease: don’t smoke.

A study from the National Cancer Institute found screening helped reduce lung cancer deaths among smokers by 15% to 20%.

“You can diagnose cancers early in asymptomatic patients so you can get them to treatment early,” Dr. Vallumsetla says of screening benefits. “They have more choices like radiation, surgery, immunotherapy or chemotherapy. And it can be potentially curable.”

On the other hand, Dr. Vallumsetla says screening risks are minor but real. Among them: false positives.

“False positive is a finding on a CT scan that might look like cancer, but after you biopsy it, it might not be cancer,” he says.

Other risks: over diagnosis of a slow-growing cancer that may not lead to illness or death. There’s also possible radiation exposure during the CT scan.

Health care providers must weigh the benefits and risks to each person and decide if they need a screening.

So who’s eligible? People between ages 50 and 80 who have a 20 pack-year smoking history and currently smoke or have quit in the last 15 years are considered high risk for lung cancer and are eligible for screening. This involves a low dose CT scan of the chest. It’s a non-invasive procedure that usually takes 10 minutes.

An abnormal finding on a CT scan will lead to a biopsy, where a doctor takes a sample of the tumor to examine it under a microscope and confirm whether it is indeed cancer. A biopsy can be done by sticking a needle through your chest, sending a tube down your throat (a bronchoscopy) or through more invasive surgery. As a pulmonologist, Dr. Vallumsetla is partial to the bronchoscopy.

“It’s excellent technology,” he says. “It’s minimally invasive. You get the procedure done. You usually go home on the same day. Recovery time is minimal. You can get back to your work within 24 hours.”

Read about lung and pulmonary services on the OSF HealthCare website. If you have concerns about lung cancer, talk to your primary care provider or a pulmonologist.