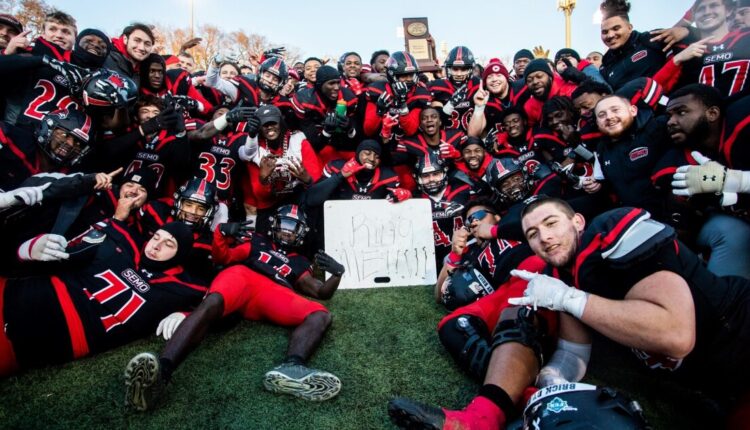 The Ohio Valley Conference champion and automatic qualifier SEMO Redhawks football team will travel to #17-ranked Montana for a first round matchup in the Football Championship Subdivision Playoffs this Saturday, November 26.

SEMO finished the regular season 9-2 overall, including a perfect 5-0 record in OVC play, and the Redhawks seek to become the first team in program history to earn 10 wins in a season.

Head coach Tom Matukewicz, who is leading the Redhawks to their third FCS Playoff appearance in five seasons, was named the 2022 OVC Coach of the Year. He is also one of 16 finalists for the 2022 Eddie Robinson Award which goes to the national coach of the year in the Football Championship Subdivision.

Meanwhile, senior running back Geno Hess was tabbed OVC Offensive Player of the Year. A native of Peoria, Illinois, Hess is only the third SEMO player to win the league’s offensive player of the year honor. He leads the FCS in total touchdowns (21), rushing touchdowns (19) and scoring (11.5 ppg). Hess is also a finalist for the Walter Payton Award, given to the top player in all of FCS Football.

Including Matukewicz and Hess, SEMO collected a total of 15 OVC postseason awards during its OVC championship season.

The Redhawks kickoff on Saturday is set for 9 pm, CT at Washington-Grizzly Stadium in Missoula, Montana. The game will be televised live on ESPN2. Local watch parties are being hosted at the Wings Etc. locations in Cape Girardeau, Jackson, and Dexter.

Where to find deals at locally owned stores