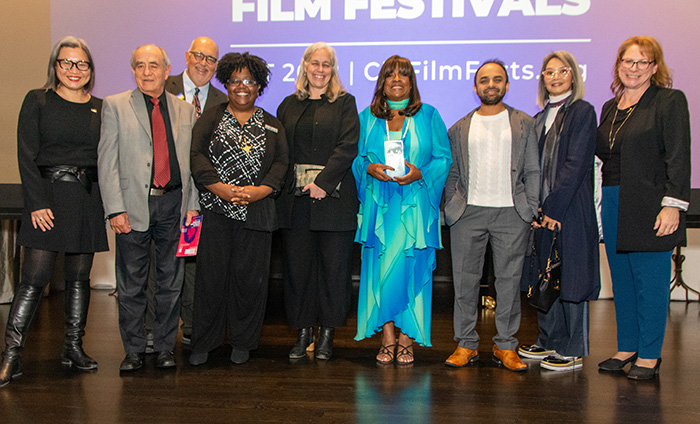 It was announced at FACETS’ annual Screen Gems Benefit honoring the life and career of Chaz Ebert that the 47-year-old cinema organization will be administering the newly launched Chicago Alliance of Film Festivals (CAFF.)

CAFF is comprised of Chicagoland-based film festivals, venues, film schools, and industry creatives whose mission is to grow the film festival sector, enrich local communities, and enhance the cultural and economic vitality of the area by expanding audiences and expertise.

In the days leading up to the Screen Gems Benefit, FACETS Executive Director Karen Cardarelli talked about the Chicago Alliance of Film Festivals’ origins and said: “As Chicago arts organizations started to emerge from the COVID-19 lockdown and our venue was increasingly engaging with the film community again and starting to discuss collaborations, the idea to establish and oversee a group of film festival partners was presented to me by Eugene Park of Full Spectrum Features and Ana Garcia Doyle of One Earth Collective. It is a true honor and an auspicious opportunity for FACETS to oversee this initiative to foster unity among Chicago film organizations so that we can grow as a collective body that benefits all.”

The City of Chicago’s Department of Cultural Affairs and Special Events (DCASE) is one of the anchoring supporters of the Chicago Alliance of Film Festivals. DCASE Commissioner Erin Harkey said: “With Chicago being a world-class city of culture as both a hub of arts production and tourism, this initiative shines a light on the importance and interdependence of its film and television community that also includes film venues and festivals, and academic institutions that teaches the craft and its history. All of these sectors combined will be all the more impactful to stimulate economic growth and enhance the education and entertainment that this city has to offer to residents and visitors alike.”