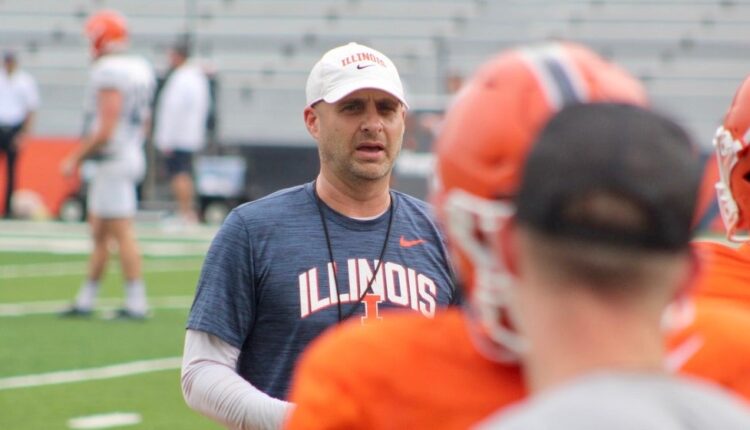 CHAMPAIGN — Illinois spent a good amount of time during the second of two open weeks focusing on red-zone offense.

The Illini, ranked no. 17 in the country, have a much-improved offense from a year ago under former UTSA offensive coordinator Barry Lunney Jr. But touchdowns in the red zone (13 of 33) have kept some games from appearing closer than they actually were.

Lunney and his coaching staff dove into self-scouting last week while emphasizing red-zone opportunities. Illinois (6-1, 3-1 Big Ten) is still bowl eligible and controls its own destiny in the race for a Big Ten West championship.

Prior to the open week, Illinois had 472 total yards in a 26-14 home win over Minnesota, the third straight win over a Big Ten West program in as many weeks. Running back Chase Brown continues to lead the nation in rushing yards (1,059), just ahead of Marshall’s Khalan Laborn (1,002).

Illini quarterback Tommy DeVito has given the offense a jolt since transferring from Syracuse. DeVito is completing 70.41 percent of his passes for 1,415 yards, 10 touchdowns and two interceptions to go with four rushing touchdowns.

Here’s what Lunney’said during his weekly press conference in the press box on the eighth floor at Memorial Stadium.

What stands out to you about Nebraska?

Lunney: “They’re big and physical. Obviously the environment is a challenge, playing on the road in a place that has such a great environment and crowd noise. They play with a lot of intensity up front. They play hungry. They’ve really been playing well the last few weeks defensively, too. Another great Big Ten challenge.”