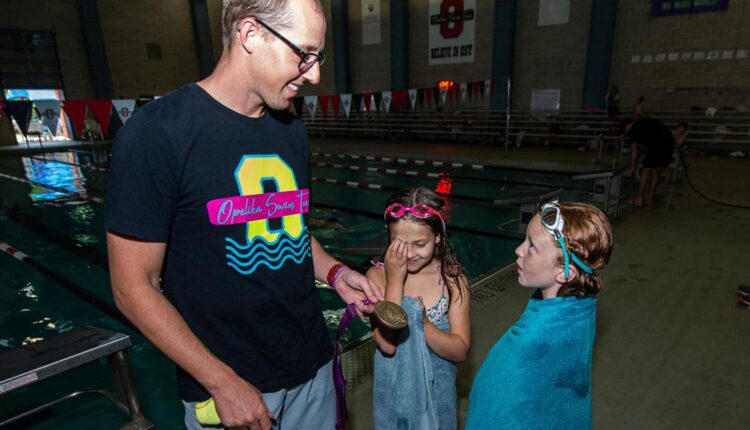 The Opelika Swim Team has had tremendous growth over the last four years.

Olympic gold medalist Tyler McGill, 34, started coaching the team of about 50 swimmers in 2018, and now the team has grown to about 200.

“It’s been really awesome to see that growth and to see all the young faces fall in love with the sport,” McGill said.

The team consists of swimmers between the ages of 4 and 18, including McGill’s two daughters Amelia, 8, and Tennant Lane, 5.

The team competes year round. On Friday and Saturday, the Opelika Sportsplex and Aquatic Center hosted about 900 swimmers at the Alabama Recreation & Park Association State Swim Meet.

The road to gold

McGill grew up in Champaign, Illinois, and was recruited by Auburn University in 2006. He swam on the Plains for four years and also met his wife Julianne, who was on the Auburn women’s swim team.

Richard Quick, Auburn’s head swim coach at the time, asked McGill if he would consider trying out for the Olympics. McGill said he told Quick he would love to do that, but his priority was winning a national title for Auburn University again.

“When you make a world championship team, you’re one of the top 2 in your event in the country,” McGill said. “So at that point, I was about three years out from the next Olympic trials, but it gave me the confidence that I could make the team.”

While preparing for the 2012 London Olympics, McGill traveled abroad to competitions in Australia, China, Germany and Russia.

After making the team, he went to a training camp in Knoxville, Tennessee, where he got to meet the other members of the US Olympic swim team, including Michael Phelps. The team spent a week in France and then headed to London.

McGill said the opening ceremony is where he felt the grandeur of the Olympics, and he couldn’t believe he was there.

During the walk from the Olympic village to the stadium, McGill said people lined the road clapping, cheering and wishing the athletes good luck.

“Watching the opening ceremonies growing up, my cousin and I, we would always recognize who is shown on TV,” he said. “They always show the flag bearer for the United States, a couple of the track stars, gymnastic stars or a swimmer and always show the basketball team. So I told my family when I’m going to the opening ceremonies I’m going to walk in with the basketball team.”

McGill remembers walking in next to Tyson Chandler, a 7-foot basketball player for the Dallas Mavericks, as confetti exploded into the air.

“All this confetti is running down, it feels like you just won the Super Bowl,” McGill said. “I’m looking around and Tyson Chandler is standing next to me. He looked down and was like, ‘This is pretty cool isn’t it?’ and I was like, ‘Yeah, this is really cool!’”

When the time came to compete, McGill said he wasn’t as nervous as he was when he competed to make the US team, which is one of the hardest Olympic teams to make in the world.

“Often times the swimmers who get third or forth place and miss making the Olympic team could be in a position to win a medal at the Olympics,” he said. “It’s so competitive and that pressure on me was always greater than the pressure that I felt at the Olympics.”

McGill helped the US team win gold by racing in the preliminary 4×100 medley relay along with Eric Shanteau, Nick Thoman and Cullen Jones.

McGill and his three teammates qualified the US team to race in the finals where Michael Phelps, Matt Grevers, Brendan Hansen and Nathan Adrian carried the team the rest of the way to winning gold.

He also placed seventh in the individual 100 meter butterfly race, for which he had qualified in the US Olympic Trials by beating Ryan Lochte and finishing second to Michael Phelps.

“In hindsight, I wish I would have felt a little bit more urgency at the Olympics. I performed well and did well, but not well enough to win an individual medal,” McGill said. “I was very relaxed in the Olympics because I just really wanted to appreciate and soak up as much as I could.”

McGill and his three relay teammates were in the stands watching the final race and when the four final swimmers took the podium to accept their medals.

“There’s no one more excited about the team winning gold than the four of us because we know that means that we’ve also earned and won a gold medal,” McGill said.

Now anytime he hears the national anthem, he flashes back to being in the stands at the London Aquatic Center watching the American flag being raised.

A year after competing in the Olympics, McGill had a shoulder injury which changed the direction of his swimming career. In 2013 he had the opportunity to start coaching at Auburn University.

McGill said Brett Hawke, Auburn’s head swim coach at the time, asked him if he was ever interested in coaching. Every time Hawke asked McGill would say no, but in 2013 he decided he would take on the role of coach.

He stayed at Auburn University until 2018 when he decided to start coaching the Opelika Swim Team at the Opelika Sportsplex and Aquatic Center.

McGill came to Opelika with a goal to not only build the swim team program, but also to teach the community how to swim and be safe around water.

“I love the coaching aspect of what I do, but to see the change in what swimming means in this community, to see the energy and the passion in a different way than maybe it was right before I got here, it’s been really special to see that change,” he said.

Because of the growth of the Opelika Swim Team and the increasing interest from the community in swimming, McGill and the City of Opelika are considering adding a 50-meter Olympic-sized competition pool at the Sportsplex by 2024.

McGill said this will create a designated pool for swim team practice and meets and allow other citizens to use the current pool for recreational swim at the same time.

Staff at Starbucks Store in Rockford votes yes to Unionize