HitchCon 2022- Hitchcock in a Time of Crisis – The Impact 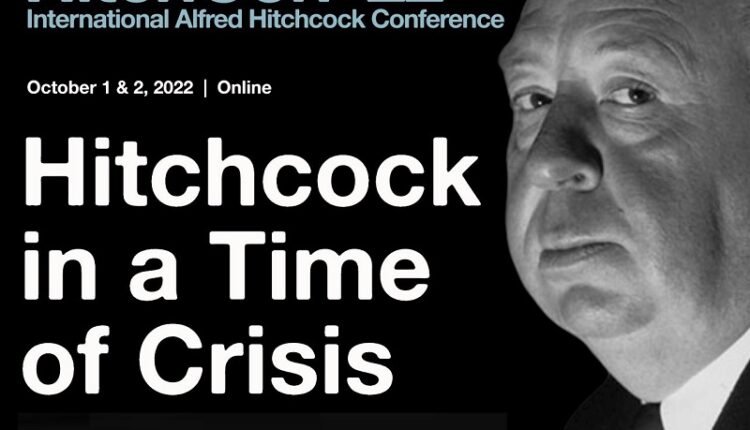 HitchCon offers a fresh look at the master of suspense for the 21st century. The International Alfred Hitchcock Conference took place Oct. 1 and Oct. 2 digitally and this year, HitchCon was presented differently than in previous years.

According to the website, “Join authors, filmmakers, artists, fans and, of course, the world’s greatest Hitchcock experts for a weekend of inspiration, idea-sharing, and networking.”

Virtually, once film buffs purchase tickets, they get a link to a platform called Hopin (previously used Zoom). This new website allows talks and panels to take place, as film and play screenings, but one advantage is the networking side with breakout groups and live video meet and greets (and live Q&As) with the speakers after each panel.

Media Studies Program Director and Assistant Prof. Louis Grasso is involved with Mercy’s connection with HitchCon as is Film Studies Prof. Steven DeRosa, who is a speaker at the event itself every year. DeRosa is also a member of the HitchCon Board of Advisors.

As the conference was being held virtually, twelve of Mercy’s Media Studies students were able to participate thanks to an Instructional Enhancement Grant received from the Provost’s Office. “It’s important for students to have these kind of experiences that expose them to the original research that is out there, and hopefully the takeaway is ‘I can see myself doing this,” said DeRosa.

Last year, the conference featured 32 academic presentations, 10-panel discussions, a keynote address, and screenings of two feature films and several original documentaries, all revolving around the theme of Hitchcock’s Lessons in Love. This year’s theme was Hitchcock in a Time of Crisis and promises to bring a fresh look at the Master of Suspense in the context of 21st-century realities. These crises include climate change and pandemics, threats of war, advances in Artificial Intelligence (AI), political unrest, and more that are prevalent in today’s society.

The board for HitchCon is also in charge of The Hitchcockian Quarterly, an online magazine dedicated to the fine art of Alfred Hitchcock, film, and life itself. It is mostly edited and published by Joel Gunz, who is also the president and the host of HitchCon as a part of the board.

This board is made up of other Hitchcockian experts and is led by Gunz, as he is self-described as “an independent scholar known worldwide as the Alfred Hitchcock geek”. There are way too many accolades to mention in this group, but joining DeRosa and Gunz on the board includes some of the speakers from HitchCon.

Elizabeth Bullock is an adjunct instructor that teaches cinema, art history, and humanities courses at the City Colleges of Chicago and film studies at Dominican University, Illinois. Sidney Gottlieb edits the Hitchcock Annual and is a Professor of Communication and Media Studies at Sacred Heart University, Fairfield, Connecticut. Elisabeth Karlin is an award-winning NY-based playwright and is a frequent contributor to the Alfred Hitchcock Geek Blog. Pat A. McFadden was an executive assistant at Walt Disney Imagineering for 23 years and has worked as a first assistant film editor on HBO television features. Walter Raubicheck is an English Professor at Pace University, New York. And Gunz, other than being the president and host of HitchCon and publisher of THQ, is also an award-winning filmmaker with his critically-acclaimed documentary series.

“Back in 1999, NYU organized a three-day academic conference to mark the centenary of Alfred Hitchcock. It was a major event in the film scholar community, and I was honored—if not a bit nervous—to present my research for the first time publicly in advance of the publication of my book Writing with Hitchcock,” said DeRosa. “Now here we are twenty-plus years later and the Hitchcock studies community has grown so much in that time that it can sustain an annual conference devoted to his work.”

DeRosa says as part of the advisory board at HitchCon, the question the board initially posed was ‘how is Hitchcock’s work relevant in the 21st century?’ And this led us to the conference theme of Hitchcock in a Time of Crisis, “as his films touch upon themes relevant to the environment, the pandemic, gender issues, and government encroaching on our liberties,” he added.

2022 marked the 50th anniversary of Hitchcock’s Frenzy, which remains a controversial work because of its violence toward women. In light of #MeToo, HitchCon included a screening of the film and devotedly half a day to discussing its themes in relation to other Hitchcock films while also considering the many representations of strong female characters throughout his canon, said DeRosa.

There are plenty of other speakers not on the board who also spoke during the conference, with time slots to showcase their work as avid fans and experts of Hitchcock. From authors to professors to instructors to historians to scholars to producers to writers, all aspects of Hitchcock are covered essentially.Everyone brings a new perspective or light on everything Alfred and his work that impacted the film industry and changed cinema forever.

Film and Culture concentration is part of the Media Studies program in the Department of Communication and the Arts.

According to Grasso, “Mercy’s Media Studies Program aims to provide students with unique academic experiences that will prepare them for their professional careers. This is done through internships, exposure to guest speakers, and activities outside the classroom.”

‘Another Appalachia’ by Neema Avashia