How is chocolate made? At Fannie May in NE Ohio, carefully and tastefully – literally (photos) 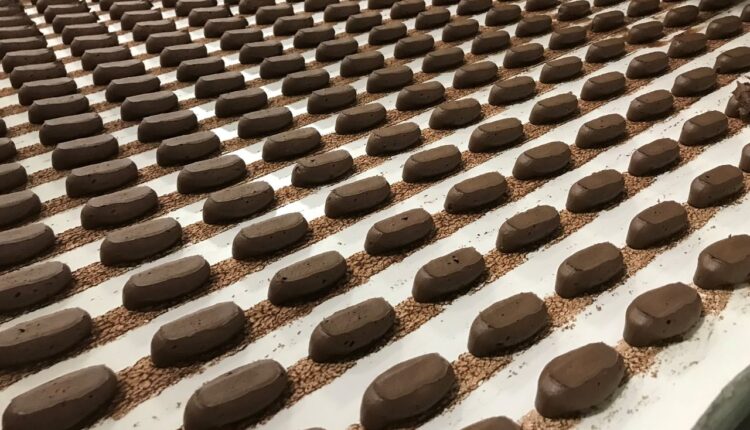 NORTH CANTON, Ohio – If you ever wanted to be the proverbial kid in a candy store, well, your dream can come true.

Four days a week, at least.

That’s when Fannie May offers tours of its production facility in North Canton, Willy Wonka-like peeks into its sweet operations.

In a way, chocolate is a cottage industry in Northeast Ohio, from longtime favorite Malley’s to mom-and-pop operations like Sweet Designs Chocolatier in Lakewood and many others. But if you want to see a massive chocolate factory in operation head to Stark County. Making and packaging chocolates takes almost 400 employees working in the facility, which covers 220,000 square feet. Their work has helped the company, as brand director Jennifer Peterson and Vice President and General Manager Rick Fossali said, become the fastest-growing premium chocolate company in the United States.

Fannie May’s roots date just more than 100 years. Now, tucked into the shadow of Akron-Canton Airport – literally in walking distance – it efficiently churns out an assortment of products. Thousands of pieces of candy are draped with chocolate as assembly lines roll, with a variety of quality-control measures in place. The only thing missing is Veruca Salt and her attitude.

“It’s a generational brand; people have grown up with it,” Peterson said.

Henry Teller Archibald started the first Fannie May store in Chicago in 1920. The company has been sold a few times over the years, including by 1-800-Flowers, before being bought in 2017 by Ferrero, the international conglomerate that owns Nutella, Ferrero Rocher and others. It’s the world’s third largest chocolate company.

The North Canton store (you can’t have a chocolate-manufacturing facility without a store, walk-up counter and shelves lined with sweets, right?) recently underwent a refresh.

“In the last three years we’ve been up year over year in traffic, which is incredible,” Fossali said. “Take out for the very beginning of Covid – could you be open, could you not be open – but ever since then if you look at the numbers they’ve been incredible for the retail stores.”

How chocolate is made

Saunter through the facility, and the soft, slightly sweet aroma hangs as workers diligently attend to assembly lines and packaging stations. But before any of that chocolate is turned into solidified blocks ready for boxes, it arrives at the facility in liquid form.

Proprietary blends from suppliers come in about 115 degrees through trucks holding 40,000- to 45,000-pound tanks. Hoses are attached from tanker to intake valves. For strict food-safety protocol, those valves remain locked at all times unless chocolate is flowing.

“So if we wanted to fill every single tank up in our facility, we could hold a million pounds of chocolate,” said Vince Grishaber, director of plant operations.

When he first started at the company in 1994, Grishaber had images of “I Love Lucy,” with Lucy and Ethel getting overwhelmed on the assembly line.

“And,” he said, “you don’t know what you don’t know. You see all this equipment. You think, ‘What’s going on?’ You find out real quick this isn’t ‘I Love Lucy.’ It’s a real operation, real machines, real things. In my mind I’m going to walk in and be dipping candy. That is never the case.”

“We went from one line to all of a sudden, ‘We need to have as much production as we possibly can,’ ” Grishaber said about increasing the lines within a year and three months ago. Business is doing so well, the company is mulling yet another line.They handle 7.5 million pounds of S’mores and related products annually.

“It’s something we got our teeth into and have gotten really good at, and our customers love this product,” he said.

On the conveyor belt section vibrates to shake out pieces that are too small. They go through a screen filter and get re-used elsewhere as best as possible. A blower blows off a certain amount of chocolate to ensure the right percentage is being used.

“We control the weight with that,” Grishaber said.

The pieces then enter a cooling tunnel at 65 degrees. The temperature is dipped a bit before turning back to 65. That climate-controlled process yields a shine and snaps on the chocolate. You don’t hit the right temperatures and sugar crystals will develop or the chocolate won’t look as good, he said. It will still taste the same, he added, but won’t look as pleasing.

Sometimes workers pull several pieces to weigh them to make sure they are in proper range.

“People want to make sure that we have the right amount of pecans on their pixies,” Peterson said.

In the movie “Casino,” Robert DeNiro’s character Sam Rothstein becomes upset by the disproportionate number of blueberries in muffins. Here, workers try to aim for product consistency – though not to the pathological point of Rothstein, who goes ballistic when his muffin has a couple of blueberries and his associate’s is filled with the berries.

Quality control and safety are paramount. X-rays are used to ensure no foreign objects ever wind their way into the candy. No open-toe or open-back shoes are allowed. And anyone – even visitors on the floor – must extend their hands into a warm-water washing machine each time they enter. The plant closes for a week annually for a deep cleaning and machine check.

“Fast packers” are workers who have tested into the position by efficiently packing boxes. Lucy and Ethel would not have made it here.

“Quality always has to start with the production folks, then you get the support of the quality team to help drive food safety, high-end quality products,” Grishaber said.

Grishaber is pushing three decades in a variety of roles with Fannie May, having started out of high school.

“I taste them all in time. One of the unique things about our products is when we taste our products we get to enjoy them.”

He didn’t expect this to be his life’s work. With his passion comes a bit of basic science knowledge. Knowing how humidity affects the process and product is key, for example.

“I fell in love with it. When you’re making candy and when you’re putting smiles on people’s faces it’s hard to not fall in love with it,” said Grishaber, who said Dark Pixies are a personal favorite and often fill a bowl in his office.

Sometimes chocolates are pulled out to be weighed. Consistency is key.

About 50 Fannie May stores are located primarily in the Chicago area. The company concentrates its market as far west as Davenport, Iowa; as far south as Champaign, Illinois; and as far east as North Canton.

The company has emphasized remodeling and relocating while targeting the mass-production consumption market. Fannie May is sold in Sam’s Club, Costco, BJ’s Wholesale Clubs, Meijer, assorted drug stores and other places, Peterson and Fossali said.

“Chocolate was a real go-to for people over the pandemic,” Fossali said.

At the North Canton production facility, more than 100 different confections are made and distributed. The store sells individual pieces as well as made-to-order boxes.

“When you come here you want a choice. Everyone’s got a different favorite, so we’ve got to have a lot of variety for people or else it doesn’t work,” Fossali said.

Customer Appreciation Day in the days following Black Friday in the beginning of December is a huge sales period, as is Valentine’s Day, which really covers three days – Feb. 12-14 – Peterson said.

By number of pounds made and distributed, Fannie May’s biggest seller is S’mores. Vegan marshmallows and crunchy graham cereal are covered in chocolate. The biggest product out of stores is Pixies. And seasonal products include Pumpkin Pie Spiced Pixie and six versions of cream eggs, Fossali said.

Solid chocolate with nothing in it lasts about a year. If it has cream in it, its lifespan shortens to 30 to 60 days, they said.

The process of making creams, which came about in the 1920s, is similar to today, Peterson said, adding, “there’s actually no cream in a buttercream. It’s literally the function of things being creamed together.”

Their products fall under the adage, ‘Don’t fix what ain’t broken.’ Many have been around for decades, which adds to the generational appeal of the company’s chocolates.

The Pixie is 76 years old and hand-poured with crunchy caramel covered in milk or dark chocolate.

Mint Meltaways date to 1963 and have a peppermint center with milk chocolate or green pastel confection coating.

“The reason why it’s called ‘Meltaway’ is because literally the coating will melt away on your tongue because of the different temperatures of the milk chocolate and the confection. It melts away, and you get that strong peppermint taste,” Peterson said.

And for the chocoholics out there, ‘Buckeyes’ is not a copyrighted name because it is so broad and has multiple applications compared to, say, ‘Turtle.’ (Pixie is Fannie May’s Turtle-like product.)

And this year, the Trinidad – toasted coconut topping and chocolate truffle center – is celebrating its 50th birthday.

The entire operation involves a blend of automation (assembly lines) and human interaction (hand-packed boxes). The only thing missing is Lucy and pal Ethel cramming chocolates into their mouths, blouses and hats.

“No one is stuffing their face like Lucy and Ethel,” Fossali said.

Ah, but we can dream.

Where: Fannie May is at 5353 Lauby Road, Green. It is adjacent to Akron-Canton Airport and about 50 miles from downtown Cleveland.

Tours: Free tours are offered 10 am to 4 pm Monday to Thursday. Reservations are requested for parties of more than 15 people. Tours are tailored for groups based on adults vs kids. They last 30 to 45 minutes based on the group. They start with a short video.

I am on cleveland.com’s life and culture team and cover food, beer, wine and sports-related topics. If you want to see my stories, here’s a directory on cleveland.com. Bill Wills of WTAM-1100 and I talk food and drink usually at 8:20 am Thursday morning. Twitter: @mbona30.

Get a jumpstart on the weekend and sign up for Cleveland.com’s weekly “In the CLE” email newsletter, your essential guide to the top things to do in Greater Cleveland. It will arrive in your inbox on Friday mornings – an exclusive to-do list, focusing on the best of the weekend fun. Restaurants, music, movies, performing arts, family fun and more. Just click here to subscribe. All cleveland.com newsletters are free.

Listen: He Was Denied Care Because He Owed His Doctor Less Than $100

Richardson Introduction Wednesday, A New Logo in Rockford, Call to the Hall, and Other Blackhawks Bullets