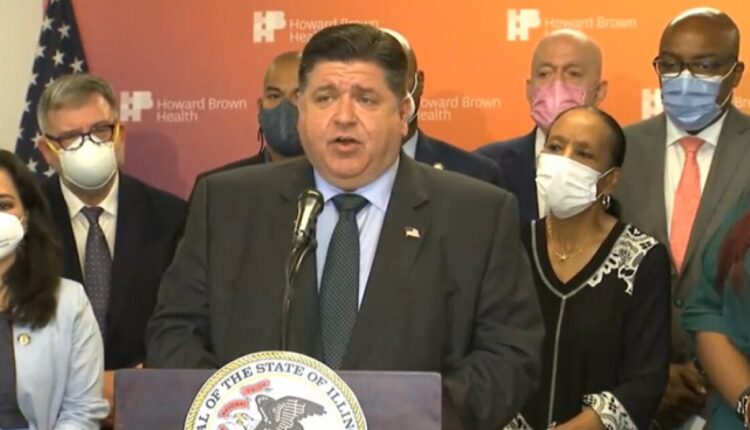 SPRINGFIELD—Gov. JB Pritzker will call a special session of the General Assembly in the coming weeks to focus on legislation to strengthen women’s access to abortion and other reproductive health services in Illinois.

“We knew this day was coming,” Pritzker said at a hastily called news conference in Chicago. “The extremists on the Supreme Court have made an abhorrent decision, one rooted in partisanship, leaving an indelible stain on our nation.”

Pritzker had already been scheduled to hold a news conference Friday to highlight legislation he recently signed expanding access to medication that protects against HIV infection. But the Supreme Court’s decision, released shortly after 9 am, upended those plans and set off a flurry of reaction, both for and against the ruling.

“Today, Illinois Right to Life joins millions of Americans in celebrating the end of Roe v. Wade, the 1973 Supreme Court decision that has denied over 63 million preborn children their most fundamental right: life,” the Illinois Right to Life organization said in a statement. “With today’s ruling in Dobbs v. Jackson Women’s Health, states have regained the ability to protect preborn children and their mothers.”

Attorney General Kwame Raoul criticized the decision in a statement.

“I am extremely disappointed with today’s Supreme Court decision, which jeopardizes the health, the safety and the lives of millions of women in the United States – especially those who already have the least access to health care and other resources,” he said. “This single decision rolls back 50 years of court precedent and with it, decades of progress toward reproductive autonomy.”

Illinois is among the states with laws already on the books protecting access to abortion. In 2018, the state adopted a law allowing public funding of abortion through its Medicaid program. And in 2019, lawmakers passed the sweeping Reproductive Health Act which, among other things, enshrines abortion access as a “fundamental right” in Illinois law.

Friday’s Supreme Court decision will have no effect on those laws. In fact, Justice Brett Kavanaugh, in a concurring opinion, specifically pointed to Illinois and other states as being unaffected by the decision.

But Illinois’ laws stood in stark contrast to those of some neighboring states that already had so-called “trigger laws” on the books that would either ban or severely restrict access to abortion upon reversal of Roe v. Calf.

“Let me make this explicit and clear to women throughout our state, throughout the Midwest and our nation – Illinois will be a safe haven for the exercise of your reproductive rights,” Pritzker said. “In Illinois, Roe v. Wade is still the law and it will remain the law as long as we have a pro-choice legislature and a pro-choice governor.”

It wasn’t immediately clear what types of legislation lawmakers would pursue in a special session.

One that is likely to come up, though, is House Bill 1464, which prohibits state regulators from revoking or suspending the license of a health care provider solely because they were sanctioned in another state for performing abortions. That measure passed the House this year but requires action in the state Senate.

“Right now, Illinoisans can already get an abortion in all nine months of pregnancy for any reason and use taxpayer dollars to pay for it. But that’s not enough,” he said. “Now, they want us to help pay for out-of-state residents to travel to Illinois to receive abortions and even allow non-physicians here to perform them.”

The Supreme Court’s decision is also certain to cause political fallout in Illinois because it came just four days before the state’s June 28 primary elections, and it is certain to be a top-tier issue going into the Nov. 8 general elections.

“For this primary on Tuesday and November’s general election, game on. This is on the ballot,” Sen. Christina Pacione-Zayas, D-Chicago, said at the news conference.

Capitol News Illinois is a nonprofit, nonpartisan news service covering state government that is distributed to more than 400 newspapers statewide. It is funded primarily by the Illinois Press Foundation and the Robert R. McCormick Foundation.

Houses aren’t cheap on Staten Island, but where in the US is real estate…

How to enjoy the Memorial Park concert? Be prepared for the heat | Local News