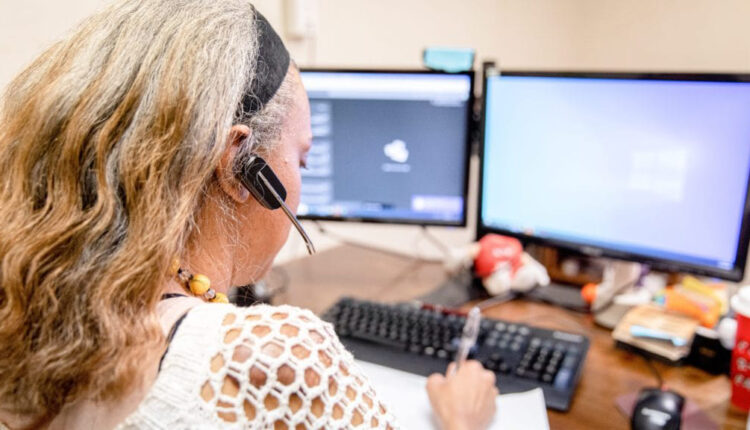 If you need to talk, or if you or someone you know is experiencing suicidal thoughts, text the Crisis Text Line at 741-741 or call the National Suicide Prevention Lifeline at 1-800-273-8255.

America’s new national mental health crisis line—988—goes live on July 16. The three-digit hotline is supposed to make it easier for people struggling with addiction, suicide, and mental illness to get help fast.

Congress established the line in October 2020, passing legislation to convert the existing 10-digit National Suicide Prevention Lifeline into an easy-to-remember three digits. Mental health advocates see the launch of this new number as a rare opportunity to connect millions more people in crisis with the help they need.

While hopes are high for the new line, there are still significant questions about whether states are ready. Most call centers will not be fully staffed when the line goes live, a fact some who work in the field blame in part on inadequate funding from states and the federal government.

There’s also apprehension about whether the other parts of the so-called crisis care continuum — such as mobile crisis teams staffed with mental health professionals and community-based treatment options — will be ready to meet the expected increase in demand. Federal officials expect up to 12 million calls, chats, and texts could come into 988 in its first year, and research suggests around 20 percent of those contacts will need some sort of in-person response.

As 988 prepares to go live, communities are continuing to grapple with these core elements of the line’s promise: a place to call, someone to respond, and a place to go.

A place to call: confronting a tight labor market

Mental health advocates and law enforcement have celebrated 988’s launch as much needed and overdue.

“It helps divert a significant portion of the people that otherwise might end up in the criminal justice system for no other reason than the fact that they are mentally ill,” said Tony Thompson, sheriff of Black Hawk County, Iowa.

But 988’s rollout is proving to be complicated.

Emily Blomme, the CEO of Foundation 2 Crisis Intervention Services in Iowa, said she’s scrambling to hire the extra staff she needs in time for the launch.

Foundation 2 is one of two nonprofits contracted with the state of Iowa to set up 988 call centers. It already operates a call center under the National Suicide Prevention Lifeline.

Blomme said her goal is to fill 23 new positions for her call center with the funding she’s received from the Iowa Department of Human Services.

As of late June, she had filled just 10 of those positions, and has only been able to recruit six of the 18 additional crisis counselors she would like to have.

“It’s really hard to say, ‘Hi, you need to have a bachelor’s degree and two years of experience, and I’m going to pay you $17 an hour,’ ” she said.

Foundation 2 has pulled from its reserve funds to try to boost hourly rates and offer sign-up bonuses of up to $1,500.

Blomme is fighting against a tight labor market, and the job she’s recruiting for is emotionally taxing.

“To sit with someone while they’re suffering—it’s just not an easy thing to do,” she said. “And to do that for an eight-hour shift, you know, five days a week, it wears on our teams quite a bit.”

Iowa officials said they are using federal funding, including American Rescue Plan Act dollars attached to 988, to fund call centers for the first two years of the line’s existence while they assess what kind of sustainable funding they need from state lawmakers.

But state officials said 988 contractors like Blomme are welcome to ask for more funding if they need it.

Someone to respond: coordinating between 911 and 988

Calling 911 can be dangerous — even deadly — and that’s especially true for people of color who are more likely to be killed by police.

Another risk factor? Having a mental illness. That’s why many are hopeful that going forward, more mental health calls will be diverted from 911 to the trained mental health professionals at 988.

In Kentucky, Mike Sunseri, deputy executive director at the Kentucky Office of Homeland Security, has spent the past few years trying to make sure that 911 and 988 can coordinate effectively.

“What we’ve been trying to do with our colleagues in 988 is help establish a set of guidelines,” Sunseri said. “So essentially like a phone tree: If a caller calls with this situation and this action happens, then is it appropriate to continue the call with 911? Or would the call be better served with 988?”

People who answer 911 calls are used to thinking in terms of three buckets: fire, ambulance, or police. The new protocols will add a fourth: mental health.

Sunseri, who is also the administrator of the state’s 911 Services Board, is looking toward California, which he says is a few steps ahead of the game in this kind of work, and places like Austin, Texas, where they’ve figured out how to route calls seamlessly without putting people on hold.

That kind of coordination between 911 and 988 may be more feasible in larger cities with more resources. There are at least a few places in Kentucky—cities like Owensboro and Louisville—taking steps in that direction, but it’s likely trickier to pull off in more rural parts of the state.

There are also questions about liability, Sunseri said. What if 911 passes a call off to 988, loses knowledge of what happens to the caller, and there’s a bad outcome?

“One of the things Kentucky’s looking at is: What kind of exchange of information can we have after the call is transferred either direction, to find out how the call was treated and ultimately resourced?” he said.

Sunseri said efforts to coordinate will continue after 988 goes live, and it gives him hope that coordination of 911 and 988 has been part of preparations from the very beginning.

A safe place to go: the ‘Living Room’ approach

Across the US, emergency departments and jails are the primary providers of emergency mental health care. While the vast majority of 988 calls will be resolved over the phone, it’s unclear where people who need in-person assistance can go.

In Illinois, there’s been success with a program that some hope will help fill this gap.

The state is home to nearly two dozen so-called “Living Rooms.” They’re designed as an alternative to the ER, where people experiencing suicidal or homicidal thoughts, panic attacks, severe depression, or struggles with substance use can easily find help.

“We have absolutely had clients come in here, who were definitely struggling … and have said, ‘This saved my life, coming here, having this to be able to talk to somebody,’ ” said Christina Gerlach, the crisis services manager at a Living Room in Peoria, Illinois.

These facilities are usually grant-funded and primarily staffed with recovery support specialists, Gerlach said. This role requires about a year of training and personal experience with mental health struggles or addiction.

In all of Illinois’ Living Rooms, visitors can just walk-in — no doctor’s note or payment required.

One downside is they aren’t open 24/7. But these facilities are promising, even though research on them is limited.

In one small study, researchers found of the more than 200 visits to a living room outside Chicago, 93 percent didn’t need further care at an ER. Lead researcher Michelle Heyland said this saves money for both health care providers and patients.

Two-thirds of participants reported learning coping skills as the most helpful aspect of their Living Room experience, she added.

“Eighty percent said the most helpful thing was the ability to talk through the situation and problem solve,” said Heyland, an associate professor at Rush University in Chicago.

There are at least a dozen states that have similar models, including Arizona, Tennessee, and Georgia.

As public awareness of both 988 and Living Rooms remains low, it’s uncertain whether more people will be directed toward these community-based centers. In the meantime, leaders from many Living Rooms say they’re preparing.

This story comes from a collaboration between the health policy podcast Tradeoffs and Side Effects Public Media, a public health news initiative based at WFYI. This story is part of a Tradeoffs series on 988 supported, in part, by the Sozosei Foundation.