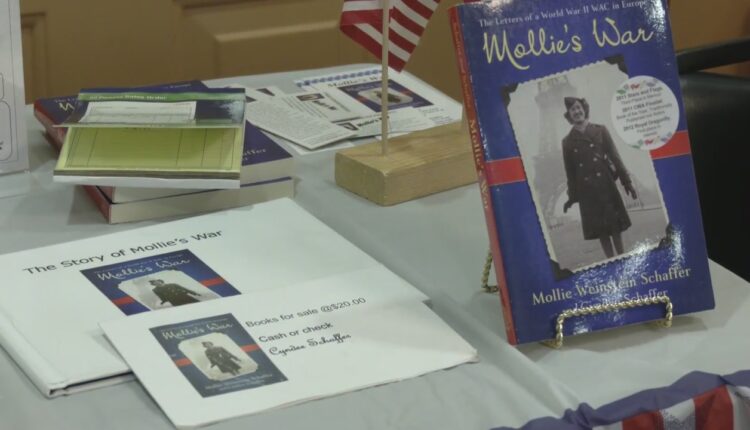 ROCKFORD, Ill. (WTVO) — Author Cyndee Schaffer’s mother was one of the first women, other than nurses, to serve overseas in World War II. That’s why she wrote a book about her.

“When she was living in her assisted living facility, she would spend her whole time with the men who had served because she served,” Shaffer said of her mother, Mollie Weinstein Schaffer.

Mollie Schaffer was in the Women’s Army Corps (WAC).

“It just gives a whole different perspective on World War II because most of the time it’s the men’s stories or it’s the nurses stories. And this was a woman who decided to join up and she wasn’t a nurse,” Schaffer said.

Mollie left the US to serve in England and France. Her journey was uncharacteristic for women of the time.

“The males perspective of the women in the war, how they felt that women should not be serving and how women couldn’t serve and that the only things they were good for were doing the office, work so it was very enlightening as the opinions of others with the women in the war,” said David Ruffin, who is on the board of directors for Rockford’s Ethnic Heritage Museum.

Schaffer wrote a book about her mother, called The Journey of Mollie’s War: WAC’s and WWIIbased on some of the letters Mollie wrote home during the war.

“You know, you see in the newspaper, in the nineties and the early 2000s, that they were looking for stories. You know, call this person. They want your story. Tell them about what you did in the war.’ And I would say to my mother, call this person! They want your story! And my mother would say, ‘nope I want my own book. I don’t want to be part of someone else’s story.’”

Well, Schaffer did just that. The book provides insight into what it was like, from the perspective of women in uniform.

“I could not believe that my mother would have made the decision she did to join the military,” she said. “She was a very quiet person. She didn’t make waves. She was just very quiet and meek and for her to spend these two years in the military, all the different things that she did, I was just beyond amazed.”

“The most important thing is to remember veterans and how they served our country and what they gave us and if they hadn’t done what they did, America today would be a lot different than it is now,” Ruffin said. “I think those kinds of things should be honored and remembered.”

One of Schaffer’s biggest takeaways from the experience of writing her mother’s story is that it is important to learn from the past.

“You should talk to your parents, to your grandparents. You really need to learn what their lives were like before they became your parents,” she said.

Get to know Mac, our newest NBC 26 Today anchor