Jazz fest turnout shows the genre is alive and well 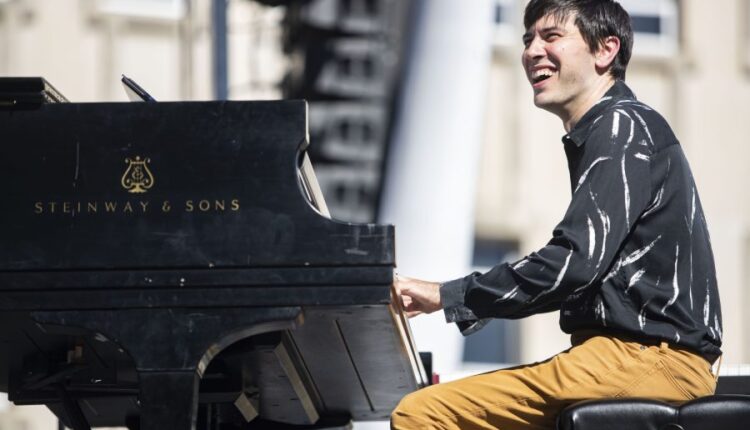 The Iowa City Jazz Festival, held this weekend, has drawn thousands to Iowa City’s downtown district to watch top jazz acts from across the nation perform.

Glenn Zaleski, a pianist for the Dan Wilson Quartet, performs during the 2022 Iowa City Jazz Festival on Saturday, July 2, 2022.

I arrived at the Iowa City Jazz Festival a little after 5:00 pm, greeted by the sounds of the Crystal Rebone Trio — a band consisting of upright bass, saxophone, and guitar — and the site of thousands of people. While some might call jazz a dying genre, the attendance numbers show that the love is still there.

Crystal Rebone, bassist of the Crystal Rebone Trio, said it’s possible jazz has had a recent uptick in listeners because of the genre’s influence in modern hip hop.

“I think that’s kind of bringing in musicians,” Rebone said. “… there’s a big focus on jazz in academia and schools, so that might be it as well. Hopefully it just keeps growing because our audience is dying slowly.”

Rebone said jazz in academia is what originally drew her to the genre.

“My high school jazz band needed a bass player. I was like, ‘Sure. Awesome.’ That’s how it happened,” Rebone said.

Rebone is also a professor of bass and jazz improvisation at Bradley University in Peoria, Illinois. She said she didn’t want to be a teacher originally, but her love for jazz grew as she gained experience.

Rebone said she’s pleased with the festival’s turnout and hopes it continues to draw larger crowds as the effects of the COVID-19 pandemic read.

The next band to play on the local stage was Goliath. A jazz and funk band, made up mostly of University of Iowa graduate students. As I was making the rounds, looking for concert-goers to talk to, the performance of the band’s drummer, Jerome Gillespie Jr., made me stop and turn around.

Gillespie’s style incorporates influences from jazz, funk, and even rock or metal. Gillespie said he first got into music through church, as his father is a preacher.

“Hey [my dad] listened to a lot of Charlie Parker,” Gillespie said, “And I didn’t really start getting into Jazz drum set until I was in middle school when I took lessons from a great teacher in Houston, which is where I’m from. There was a great program there. And I took lessons from him. And the rest is history.”

Gillespie said the turnout for the festival is partly because of a renewed appreciation for live music following the COVID-19 pandemic. Gillespie also said sampling has played a role.

“We’re seeing a lot of popular artists sample jazz musicians,” Gillespie said. “And there are people who want to give credit where credit is due. I think that has much to do with it. But I just hope that leads to a point where we all have a general appreciation for America’s original art form, which is jazz.”

I then talked to audience members Dane Tow and Emily Milefchik. Milefchik said she’s drawn to jazz by the distinct nature of the music.

“I feel like, throughout history, it’s been one of the best forms of expression, but also, it’s tied to a lot of activist movements as well. And so it’s very unique,” ​​Milefchik said.

Milefchik said the crowd in 2022 seems like it’s expanded from the year before, which she said is a good sign.

“It kind of feels like jazz might be dying out a little bit, but like this event just kind of shows that it’s not,” Milefchik said.